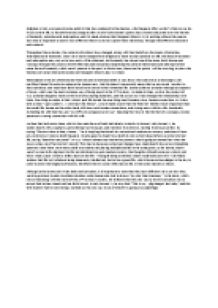 Donne and W;t. John Donnes poetry has covered and pored over the themes of humanity, salvation and redemption, and it is made obvious that Margaret Edsons W;t is nothing without the poems

﻿Religious or not, everyone at some point in time has wondered to themselves, what happens after we die? What can we do in our current life, to be safe from any dangers after we die? John Donne?s poetry has covered and pored over the themes of humanity, salvation and redemption, and it is made obvious that Margaret Edson?s W;t is nothing without the poems. But what is important to note is how different these two texts explore these main ideas, through the different characters and contexts. Throughout the centuries, the contexts of authors have changed, along with their beliefs on the topics of salvation, redemption and humanity. Since views have changed from religious to more secular opinions on life, the ideas of salvation and redemption may vary as to how each will be obtained, but humanity has stayed much the same. ...read more.

One thing to notice is that Vivian?s past life lacked the one thing most humans crave, human connection. As Vivian tells us that ?I just couldn?t... I went back the library?, we are made aware that she finds her intellect more important than her social life. Donne on the other hand, did have such human connections, and strong ones with his wife. Constantly reminding his wife that they are ?As stiff twin compasses are two;? meaning their love is like the feet of a compass, Donne possesses a strong connection with his wife. An idea that both texts share which is the main focus of both individuals, is death. In Donne?s Holy Sonnet X, he names Death with a capital D, personifying it as his equal, and chastises its existence, making it seem powerless. ...read more.

?I thought being extremely smart would take care of it.? She finally realises that life isn?t all about being immensely intellectual, but to live a good life, which Donne acknowledges is the key in order to enter the kingdom of heaven; therefore there is some reflection on life, in the same manner as Edson. Although John Donne and Vivian both seek salvation, it is important to note that they have different views on how they want to go about in order to attain salvation. John Donne asks God to drown ?my sins? black memory.? In his tears, which shows that along with the norm of the 17th Century?s society, he believed that the only way to receive salvation was to accept that he has sinned and has faith in God. In Holy Sonnet VI, he says that ?This is my... pilgrimage?s last mile;? and this tells readers that he sees being a Catholic as the only way to save himself, by going on a pilgrimage. ...read more.