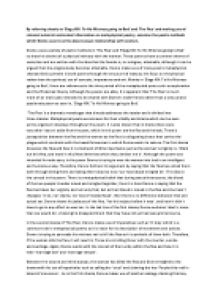 Donne uses a variety of poetic methods in The Flea and Elegy XIX: To His Mistress going to Bed to show his desires of a physical intimacy with the woman.

﻿By referring closely to ?Elegy XIX: To His Mistress going to Bed? and ?The Flea? and making use of relevant external contextual information on metaphysical poetry, examine the poetic methods which Donne uses to write about sexual relationships with women. Donne uses a variety of poetic methods in ?The Flea? and ?Elegy XIX: To His Mistress going to Bed? to show his desires of a physical intimacy with the woman. These poems share a common theme of seduction and are written with the idea that the female is, to a degree, attainable, although it can be argued that she progressively becomes attainable. Donne makes use of many poetic metaphysical characteristics present in both poems through the structure of stanzas, the focus on the physical rather than the spiritual, use of conceits, imperatives and wit. Mainly in ?Elegy XIX: To His Mistress going to Bed?, there are references to the time period of the metaphysical poets such as exploration and the Ptolemaic theory. Although the poems are alike, it is apparent that ?The Flea? is much more of an erotic joke intended to be shared with Donne?s male friends rather than a sensual and passionate poem as seen in, ?Elegy XIX: To His Mistress going to Bed?. ?The Flea? is a dramatic monologue that directly addresses the reader and is divided into three stanzas. Metaphysical poets were known for their vitality and drama which can be seen as the argument develops throughout the poem. ...read more.

Again, Donne works with the conceit of their unity within the flea and how it is their ?marriage bed? and ?marriage temple?. Between the second and third stanzas, the woman has killed the flea and Donne heightens the drama with his use of hyperboles such as calling her ?cruel? and claiming she has ?Purpled thy nail in blood of innocence?. As in the first stanza, Donne makes use of another analogy claiming that any loss of honour due to sex or marriage with him is about as insignificant as the flea?s death, ?Just so much honour, when thou yield?st to me,/Will waste, as this flea?s death took life from thee?. The poem has been written with an irregular metre that alternates between iambic tetrameter and iambic pentameter which breaks down at the end to finish the stanza with a sense of completion, neatness and conciseness which was a feature of metaphysical poetry. Again in ?Elegy XIX: To His Mistress going to Bed?, Donne has stuck within the metaphysical conventions of poetry through writing the poem as a dramatic monologue which directly addresses the mistress. In this poem, the lady is near and becomes very attainable which would be a break from Petrarchan poetry where the mistress was unattainable and distant. The couple are in the bedroom with a natural intimacy in the way he talks to her with a conversational address. ...read more.

The ?precious? also shows that she is the world and richness in her are in all of his joys. The poet uses the legend of Atlanta to explain the distraction that her jewellery has on men. He believes that jewellery misdirects men by making them covet gems instead of focusing on what is beneath them, ?when a fool?s eye lighteth on a gem,/His earthly soul may covet theirs, not them?. There is a sense of irony at the end of the poem where he ends up naked instead of her. The poem finishes with a rhetorical question, ?To teach thee, I am naked first; why than,/ what needst thou have more covering than a man?? which lightens the mood. It is unclear whether this poem is about Donne and his wife or Donne when he was a young man in the towns enjoying freedom and sexual fulfilment which contrasts with ?The Flea? as it is known that the poet and his mistress are not married. The poem was written in iambic pentameter with frequent use of enjambment and rhyming couplets, which helps the poem flow as he pleads with his mistress for sexual fulfilment. These two poems both show Donne?s wide variety of poetic methods that he uses to show his ways of wooing a lady into bed with him. The use of conceits, imperatives, metaphors, rhetorical questions and many more portray this message with ease. ...read more.