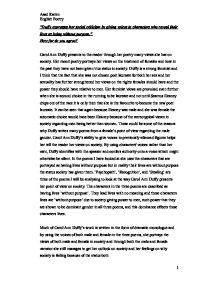 &quot;Duffy expresses her social criticism by giving voices to characters who reveal their lives as being without purpose.&quot;

"Duffy expresses her social criticism by giving voices to characters who reveal their lives as being without purpose." How far do you agree? Carol Ann Duffy presents to the reader through her poetry many views she has on society. Her recent poetry portrays her views on the treatment of females and how in the past they have not been given true status in society. Duffy is a strong feminist and I think that the fact that she was not chosen poet laureate for both her sex and her sexuality has further strengthened her views on the rights females should have and the power they should have relative to men. Her feminist views are provoked even further when she is second choice in the running to be laureate and not until Seamus Heaney drops out of the race it is only then that she is the favourite to become the new poet laureate. It can be seen that again because Heaney was male and she was female the automatic choice would have been Heaney because of the stereotypical views in society regarding men being better then women. These could be some of the reasons why Duffy writes many poems from a female's point of view regarding the male gender. Carol Ann Duffy's ability to give voices to previously silenced figures helps her tell the reader her views on society. ...read more.

She saw fame." We see that he is interested in the fame he could get in the future. "I could be anything with my looks, my brains." This view is also backed up by the way he looks after his appearance. This is because if he did not care about his life, or his life did not have a purpose then he would not take so much care over how he looks. And finally I think that he does have a purpose which is to use and abuse women to show off his masculinity. This shows that although the character may have a life with purpose Duffy still shows her displeasure at society through the poem. I also believe that 'Psychopath' contrasts 'Recognition' in terms of the structure. Unlike 'recognition' it has a free flowing structure with lots of enjambement and no set stanzas which could suggest that Duffy is trying to back up the image of the character as being arrogant and over confident by him speaking very freely and openly and gloating about his actions which the reader would see as very appalling. This also goes on to show again her views on male dominance and the arrogance and confidence it brings. The enjambement in 'recognition' could be there because it shows the reader feels that it is her way of showing her lack of freedom and that inside this meaningless and structured life she is trying to be freed. ...read more.

And I think that it can be seen that again it is similar to 'Psychopath' because Duffy still manages to show how society has made this character how he is and that society is responsible for his actions whether his life has a purpose or not. Overall through the arguments that I have presented I think that Duffy in all three of the poems expresses the dissatisfaction she has with society and its division of power between men and women and why men are given the dominance in relationships. I also feel that apart from 'recognition' it can be argued as to whether or not the character in 'Psychopath' and 'Stealing' have lives with or without purpose. I also feel that it does not affect the message Duffy tries to get across to the reader regarding society. Looking back I feel that Duffy almost certainly in all three poems tries to get her point across on society and the criticism, she has of society and the extreme amount of power it has given to men for decades, and therefore I agree with the statement that Duffy does try and 'express her social criticism by giving voices to characters who reveal their lives as being without purpose' although it can be argued as to whether or not the characters in the poems have a purpose in life. ?? ?? ?? ?? Asad Karim English Poetry 1 ...read more.