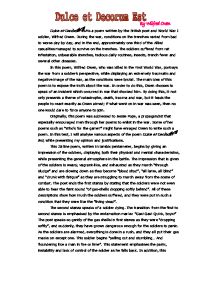 Dulce et Decorum Est is a poem written by the British poet and World War I soldier, Wilfred Owen. During the war, conditions on the trenches varied from bad to worse day by day, and in the end, approximately one third of the Allied casualties managed to survive on the trenches. The soldiers suffered from rat infestation, unbearable stenches, tedious daily routines, insects, trench fever and several other diseases.

In this poem, Wilfred Owen, who was killed in the First World War, portrays the war from a soldier’s perspective, while displaying an extremely traumatic and negative image of the war, as the conditions were brutal. The main idea of this poem is to expose the truth about the war. In order to do this, Owen chooses to speak of an incident which occurred in war that shocked him. By doing this, it not only presents a theme of catastrophe, death, trauma and war, but it leads the people to react exactly as Owen aimed; if what went on in war was seen, then no one would dare to force anyone to join.

Originally, this poem was addressed to Jessie Pope, a propagandist that especially encouraged men through her poems to enlist in the war. Some of her poems such as “Who’s for the game?” might have enraged Owen to write such a poem. In this text, I will analyse various aspects of the poem Dulce et Decorum Est, while presenting my opinion and justifications.

This 28 line poem, written in iambic pentameter, begins by giving an impression of the soldiers, displaying both their physical and mental characteristics, while presenting the general atmosphere in the battle. The impression that is given of the soldiers is weary, vagrant-like, and exhausted as they march “through sludge” and are slowing down as they become “blood shod”, “all lame, all blind” and “drunk with fatigue” as they are struggling to march away from the scene of combat. The poet ends the first stanza by stating that the soldiers were not even able to hear the faint sound “of gas-shells dropping softly behind”. All of these descriptions show how much the soldiers suffered, and they were put in such a condition that they were like the “living-dead”.

The second stanza speaks of a soldier dying. The transition from the first to second stanza is emphasised by the exclamation marks: “Gas! Gas! Quick, boys!” The poet speaks so gently of the gas shells in first stanza as they were “dropping softly”, and suddenly, they have grown dangerous enough for the soldiers to panic. As the soldiers are alarmed, everything is done in a rush, and they all put their gas masks on except one. This soldier begins “yelling out and stumbling… And floundering like a man in fire or lime”. This statement emphasises the panic, instability and lack of control of the soldier as he falls back. In addition, this statement is continued by presenting a disgusting image of the soldier “guttering, choking, drowning”. The word “guttering” accentuates the chocking sounds of a man’s throat. The phrases which evoke the shock that Owen felt are: “Dim through the misty panes and thick green light, As under a green sea, I saw him drowning.” This statement has great effect in this poem as the present an image of a man dying, while there are hundreds of men surrounding him, merely watching him die, and not bothering to do anything to help. This image brings shock and horror onto the reader’s mind, and the word “drowning” achieves to emphasise this thought. Judging by the description of the man’s death, it was very painful for the narrator to see him die: “in all my dreams before my helpless sight”. This statement can also be seen as the moment in which Owen was forced to repeat one of the most dreadful events during war, while thinking about his past painful memories and thoughts, as though compelling him to live through those moments again.

In the last stanza, the poem develops by stating that if the readers were able to observe the “[writhing] white eyes”, the “vile, incurable sores on innocent tongues” and hear the “blood come gargling from the froth corrupted lungs”, then sending men to war would be forbidden. He finishes by challenging the reader by saying that if they had been present in the actual time of the war, then they would not dare repeat “the old Lie: Dulce et decorum est / pro patria mori.” – Which means it is sweet and right to die for your country. In other words, it is an honour to defend your nation, even if it means dying for it.

In conclusion, it can be said that throughout the entire poem, Wilfred Owen exposes a grotesque, but realistic view of what occurred in the war. He achieves this by describing one of the most shocking images and moments that occurred while he was a soldier in the war - the death of a man. In the end, he completes his point by challenging the readers that if they knew what truly goes on in war, they would never tell their children, with such idealistic enthusiasm, the “Old lie”.
As my personal opinion, I feel that Wilfred Owen’s poem is contrasted against Jessie Popes poem “Who’s for the game?” as they are both presenting opposite points. However, I think that Dulce et Decorum Est manages to achieve its aim more successfully as it shows a direct, brutal and honest view of the war, and speaks of a true incident, rather than throwing rhetorical questions and including misleading images of the war. Overall, Wilfred Owen was very successful in transmitting his main message to the readers: if anyone had seen the horrors of what went on during war, then they would not dare challenge others to join; in fact, it would be prohibited.