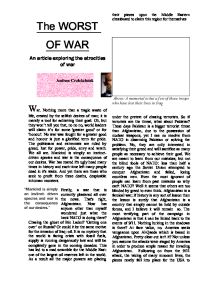 The WORST OF WAR An article exploring the atrocities of war War. Nothing more than a tragic waste of life, created by the selfish desires of man; it is merely a tool for achieving their goal. Oh, but they won't tell you that, no no no, world leaders will claim it's for some 'greater good' or for 'honour'. No war was fought for a greater good and honour is just a glorified term for pride. The politicians and extremists are ruled by greed, lust for power, pride, envy and wrath. We all are. Mankind is simply an instinct-driven species and war is the consequence of our desires. War has reared it's ugly head many times in history and each time left many people dead in it's wake. And yet there are those who seek to profit from these deaths, despicable inhuman monsters. Firstly, a war that is currently plastered all over the news. That's right, Afghanistan. ...read more.

We are meant to learn from our mistakes, but not the blind fools of NATO: less than half a century ago the Soviet Union attempted to conquer Afghanistan and failed, losing countless men. Even the most ignorant of people can learn from past mistakes so why can't NATO? Well it seems that others are too blinded by greed to even think. Afghanistan is a farcical war; if history is any sort of lesson then the lesson is surely that Afghanistan is a country that simply cannot be held by outside forces, and I believe it will remain so. The most terrifying part of the campaign in Afghanistan is that it can be linked back to the events of 9/11. Nothing lurking in the shadows is there? At face value, no. America seeks vengeance upon Al-Qaeda which is based in Afghanistan. Pretty clear-cut isn't it? Not unless you assume the attacks were staged by America in order to produce ample reason for invading Afghanistan. ...read more.

Nations competing for space and resources and as a result the weaker, poorer nations will be consumed. Former alliances crumble as former friends turn on each other in desperation. Within the nations the people will turn on their government resulting in anarchy, civil war would not be far behind. Yet the struggle for global supremacy could also reach boiling point. It is no secret that the USA fears China and what may come in the future, to that end they may step in before they are knocked off their pedestal. With these two major powers in conflict it will only be a matter of time before the rest of the world is dragged into their petty squabble. If things take a turn for the worse, the leaders of these nations may, as a last resort, decide to use nuclear weapons. We are as good as dead. Earth will become a dark, dangerous world devoid of trust; people living in fear. In short war will consume the planet. There is little we can do to stop it. ...read more.