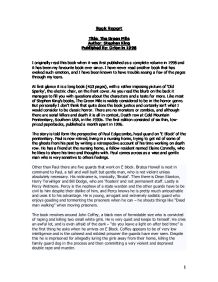 Book Report Title: The Green Mile Author: Stephen King Published By: Orion in 1998 I originally read this book when it was first published as a complete volume in 1998 and it has been my favourite book ever since. I have never read another book that has evoked such emotion, and I have been known to have trouble seeing a few of the pages through my tears. At first glance it is a long book (453 pages), with a rather imposing picture of 'Old Sparky', the electric chair, on the front cover. As you read the blurb on the back it manages to fill you with questions about the characters and a taste for more. Like most of Stephen King's books, The Green Mile is widely considered to be in the horror genre. But personally I don't think that quite does the book justice and certainly isn't what I would consider to be classic horror. There are no monsters or zombies, and although there are serial killers and death it is all in context, Death row at Cold Mountain Penitentiary, Southern USA, in the 1930s. The first edition consisted of six thin, low-priced paperbacks, published a month apart in 1996. ...read more.

While on death row Delacroix befriends a very intelligent mouse with a penchant for peppermint sweets and names him Mr Jingles. Delacroix teaches the mouse to do tricks and he appears to follow his commands. At first the guards try to kill him, but then everyone becomes rather fond of Mr Jingles. Mr. Jingles shows the loneliness that the men feel on the Mile. They are even willing to take in a mouse. Only Percy still holds a grudge against the mouse, and one day he steps on it. After Percy steps on Mr. Jingles, Coffey uses his powers to save him. After Delacroix is executed, John takes care of the mouse, and a little of his power transfers into it. The other characters are: Hal Moores, The Warden at Cold Mountain Penitentiary and his wife Melinda who is dying of a brain tumor; and Jan Edgecombe, Paul's Wife. The name of book comes from the nickname given by the guards to the corridor with a green linoleum floor that leads from the cells where the prisoners live to the execution room beyond Paul's office. Paul finds out Percy is prepared to leave Cold Mountain once he has had the chance to 'be out front' and play a key role in an execution. ...read more.

Throughout the story, Stephen King's magical use of description brings the story to life and helps to build up a strong rapport with the characters. The flitting from Paul's time at the penitentiary back to his time in the nursing home adds depth and gives Paul the opportunity to reflect, which I feel is an important part of the story. Although the book deals with some dramatic and very violent ideas, it does so in a very matter-of-fact way. I think this is mostly down to Paul's matter-of-fact personality, for example when they are doing a 'practice' execution for Arlen Bitterbuck using another man Paul comments on how an inmate's leg is usually shaved to aid the flow of current and mentions "Indians have very little body hair as a rule, but we would take no chances". I would certainly recommend this book to anyone who likes fantasy books or just fancies a bit of a darker read, from young adult upwards. The book explores the realm of the supernatural and opens the possibility that such forces may exist in our world - it certainly gives the imagination a workout. I always have problems putting it down - but then maybe I am a little biased being a hardened fan already. ?? ?? ?? ?? 1 ...read more.