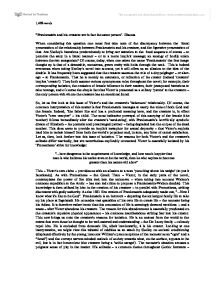 "Frankenstein and his creature are in fact the same person". Discuss When considering this question one must first take note of the discrepancy between the literal presentation of the relationship between Frankenstein and his creature, and the figurative presentation of that. Are Shelley's intentions predominantly to bring our attention to the fixed sequence of events - to perceive the story in a literal manner - or to a more implicit message; an analogy of bodily union between the two antagonists? Of course, today, when one utters the name 'Frankenstein' the first image thought up is that of a detestable, monstrous, green entity with bolts through the neck. This is indeed erroneous when taking Shelley's novel into account, yet it still offers us an allusion to the idea of the double. It has frequently been suggested that the creature assumes the role of a doppelg�nger - or alter-ego - to Frankenstein. That he is merely an extension, or reflection of his creator (indeed 'creature' implies 'creator'). They both assume various synonymous roles throughout the novel; for example, their corresponding isolation, the omission of female influence in their matters, their juxtaposed intentions to take revenge, and of course the simple fact that Victor is presented as a solitary 'parent' to the creature - the only person with whom the creature has an emotional bond. So, let us first look at this issue of Victor's and the creature's 'father-son' relationship. ...read more.

This now brings us onto the creature's reasons for isolation. He is an outcast from the world to the extent that even those he thought to be well-natured and understanding - the De Lacey family - callously repel him. He is excluded from domestic life, albeit involuntarily, � la his creator. Looking at one interpretation, we might view this rebuttal of oddities as an attack by Shelley on societal conditioning (displayed effectively by the young, innocent William's preconceptions of the monster as an "ogre" and a "fiend") and the corrupt narrow-minded outlook of society towards what, on the surface, appears to be evil, but is in fact benevolent (the creature being a 'noble savage'). The monster's situation arouses a poignant sense of pity in the reader. His solitude - a common theme throughout Gothic literature - forces him into "malignity" (this word having been repeated frequently throughout the novel by Victor as narrator). The creature is, therefore, not just a reflection of Adam, but also of Satan - an outcast from heaven (of course, the monster's 'heaven' can possibly be interpreted to be the respect and understanding of man towards him). Furthermore, the creature strikes similarities with John Milton's representation of Satan in Paradise Lost ("Better to rule in Hell than to serve in Heaven"). The monster's murderous exploits cast an ominous light over him - he is now the villain. ...read more.

the possibility for Shelley's intentions to have been for that of the double (this dichotomous murder of partners also continues to support the omission of the female). To summarise, then, it is of great import that there is nothing to rule out the possibility of Shelley delivering this work as a purposeful analogy; pointing to a bodily union of Frankenstein with his monster. Of course, we must understand that if one is to perceive the novel in this manner it will always be subjective and never constant. Yet, the evidence is there, as a supplement, for those who harbour this view. The creature and creator are spiritually one and the same. Their positions in the narrative and corresponding actions are crucially paralleled. Victor is the creature's father, Victor is the creature's God, Victor is the creature's focus of vengeance, and Victor is the only entity with which (possibly with the exception of the De Laceys) the creature has a poignantly governed relationship. Yet, to say that these two characters are 'the same person' is possibly stretching this idea to an unaccountable degree. Indeed, they may just be separate characters with strong parallels - Shelley's narrative simply outlining their synonymy and corresponding situations. Maybe Shelley's message is essentially bringing our attention to the fact that these two characters, despite being at each other's throats throughout, still maintain such a powerful understanding and spiritual bond. Nevertheless, this issue will forever be open to argument. ?? ?? ?? ?? 1,428 words ...read more.