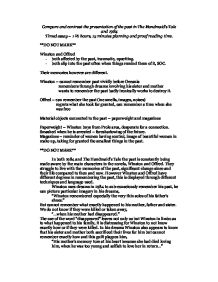 Compare and contrast the presentation of the past in The Handmaid's Tale and 1984 Timed essay - 1 1/2 hours, 15 minutes planning and proof reading time. **DO NOT MARK** Winston and Offred - both affected by the past, traumatic, upsetting. - both slip into the past often when things remind them of it, SOC. Their memories however are different. Winston - cannot remember past vividly before Oceania remembers through dreams involving his sister and mother wants to remember the past badly ironically works to destroy it. Offred - can remember the past (inc smells, images, noises) regrets what she took for granted, can remember a time when she was free Material objects connected to the past - paperweight and magazines Paperweight - Winston buys from Prole area, desperate for a connection. Smashed when he is arrested - foreshadowing of the future. Magazines - reminder of women having control, image of beautiful woman in make up, taking for granted the smallest things in the past. **DO NOT MARK** In both 1984 and The Handmaid's Tale the past is constantly being made aware by the main characters in the novels, Winston and Offred. ...read more.

This dream is still problematic for Winston however, he does not know if it was a real event or a dream. Ironically, the knowledge of the past Winston desires for he spends destroying and 're-touching' in his job. He is a clerk for the Ministry of Truth, where his job is to rewrite historical documents so that they match the current party line, this involves re-writing newspaper articles and re-touching photos. "He who controls the past, controls the future." This is a party slogan and is one of the most poignant quotes, Winston does just this daily yet doesn't want to. Offred's past is constantly present throughout HMT and is used through the technique stream of consciousness. She connects things that she sees or smells in present day to those of the past and very early on in the novel she talks of her garden, "I once had a garden. I can remember the smell of the turned earth, the plump shapes of bulbs held in the hands..." This is in contrast to Winston's past as she is sure of what hers is; the potent imagery used takes Offred back into her past and disconnects her from the present - something which she desires frequently. ...read more.

Yet he also has a love for the past, like Winston. He enjoyed women being women, looking feminine. The material object used to represent the past in 1984 has a more influential placing in the novel. A paperweight, bought in the prole district by Winston, is his way of trying to rekindle his connection with the past. "That's what I like about it. It's a little chunk of history that they've forgotten to alter. It's a message from a hundred years ago, if one knew how to read it" Symbolically, when Winston is arrested by the Thought Police the paperweight is smashed into tiny little pieces. This foreshadows later events when Winston is actually tortured into believing the same way as the party, and forgetting his urge to know more of the past. In conclusion the past in both 1984 and HMT are represented through dreams and flashbacks for both the main characters. This representation is seen constantly throughout the novel and we are reminded that the past holds memories, however minor, for both characters. Both Winston and Offred have lost the past and seem unable to get it back, even though they long for it. ...read more.