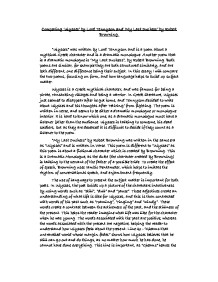 Comparing 'Ulysses' by Lord Tennyson and 'My Last Duchess' by Robert Browning.

Comparing 'Ulysses' by Lord Tennyson and 'My Last Duchess' by Robert Browning. "Ulysses" was written by Lord Tennyson and is a poem about a mythical Greek character and is a dramatic monologue. Another poem that is a dramatic monologue is "My Last Duchess", by Robert Browning. Both poems are similar, for example they are both structured similarly, and are both different, one difference being their subject. In this essay I will compare the two poems, focusing on form, and how language helps to build up subject matter. Ulysses is a Greek mythical character, and was famous for being a pirate, ransacking villages and being a warrior. In Greek literature, Ulysses just seemed to disappear after he got home, and Tennyson decided to write about Ulysses and his thoughts after 'retiring' from fighting. The poem is written in verse, and seems to be either a dramatic monologue or monologue interior. It is hard to know which one, as a dramatic monologue must have a listener (other than the audience. ...read more.

This helps the reader imagine what life was like for the character when he was young. The words associated with the past are positive, whereas the words associated with the present are negative, helping the reader to understand how Ulysses feels about the present. Line 2o -"Gleams that untravelled world whose margin fades" shows how Ulysses believes that he still can go out and do things, as no matter how much he has done, he cannot have done everything. This line is important, as "Gleams" leaves the reader with the impression that it is almost tempting to Ulysses to go and live like he did in the past. In "My Last Duchess", Browning allows the reader to understand the Duke through what he is saying and what he is doing. The first two lines introduce us to the main topic of the Duke's speech which is a painting of his last wife. The lines: "That's my last Duchess painted on the wall, looking as if she were alive" hint to us that the duchess is not alive anymore, but Browning has made us unsure, and therefore invites us to read more into the poem. ...read more.

Both poems are about the narrator and evolve around the narrator, but Browning creates this cleverly by naming the poem "My Last Duchess" when the poem is mainly about the Duke. All the way through the poem, the Duke says of his displeasure from his wife and why, almost acting as a warning to his next wife. So a poem about the "Last Duchess" is actually a poem about the Duke's likes and dislikes, which again helps to subtly build up the self centred nature of the character without revealing too much and loosing the readers' interest. Both poems are similar and different in many different ways. The most obvious similarity to both poems is their form, but if we look deeper into the poem we see that their content and their characters are very similar. However, some differences still remain in the poem. The main subject matter for both poems is death, but the two poems have different feelings towards death. For the Duke, it is something ordered and controlled by him, but for Ulysses, even though he has encountered death within his life so much he cannot accept that he will die. ...read more.