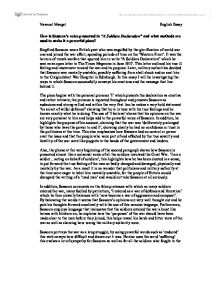 How is Sassoon(TM)s voice presented in A Soldiers Declaration and what methods are used to make it a powerful piece?

How is Sassoon’s voice presented in “A Soldiers Declaration” and what methods are used to make it a powerful piece?

Siegfried Sassoon was a British poet who was engulfed by the glorification of world war one and joined the war effort, spending periods of time on the ‘Western Front’. It was the horrors of trench warfare that spurred him to write “A Soldiers Declaration” which he sent as an open letter to The Times Magazine in June 1917. This letter outlined his true ill feeling and resentment toward the war and its purpose. Later, military authorities decided that Sassoon was mentally unstable; possibly suffering from shell shock and so sent him to the Craiglockhart War Hospital in Edinburgh. In this essay I will be investigating the ways in which Sassoon successfully conveys his emotions and the message that lies behind it.

The piece begins with the personal pronoun ‘I’ which presents the declaration as emotive and rather intimate, the pronoun is repeated throughout and presents Sassoon as audacious and strong-willed and within the very first line he makes a very bold statement “as an act of wilful defiance” showing that he is in tune with his true feelings and he knows exactly what he is doing. The use of ‘I believe’ shows that his opinions on the war are very personal to him and helps add to the powerful voice of Sassoon. In addition, he highlights the purpose of his account, claiming that the war was ‘deliberately prolonged by those who have the power to end it’, showing clearly he had no confidence or trust in the politicians at the time. This also emphasises how Sassoon had no control or power over the issue and that the people who were part of and affected by the true severity and hostility of the war were like puppets in the hands of the government and leaders.

Also, the phrase at the very beginning of the second paragraph shows how Sassoon is presented almost like a universal voice of all the soldiers involved the Great War. ‘I am a soldier…acting on behalf of soldiers’, this highlights how he has been elected in a sense, to put forward the true feeling of the men so badly changed and damaged, physically and mentally by the war. As a result it is no wonder that politicians and military authority at the time were eager to label him mentally unstable, for the people of Britain would disregard the writing of a ‘mad man’ and would not take Sassoon at all seriously.

In addition, Sassoon comments on the false pretences with which so many soldiers entered the war, many fuelled by patriotism, ‘I entered as a war of defence and liberation’ which he then cleverly balances with ‘now become a war of aggression and conquest’. By balancing the words it seems that Sassoon’s opinions are very well thought out and he puts his thoughts forward excellently with the use of this concise language. Furthermore, Sassoon employs language that insinuates that the soldiers entered the war almost like horses with blinkers on, he explains how the ‘purposes’ of the war should have been made clear to the men before they joined, this helps reveal his harsh and bitter view of the war as well as showing how wrong the military authority were.

Sassoon portrays the war as a long struggle, by using powerful words such as ‘endured’ this verb coveys how difficult and drawn out it was. He also uses the word ‘suffering’ this evokes a lot of sympathy for Sassoon as well as for all the soldiers who fought in the war. He also reveals the futility and the severity of the war with the use of the harsh adjectives ‘evil’ and ‘unjust’ and he also makes his intentions extremely clear ‘I am not protesting against the conduct of the war’ showing that he did not disagree with every aspect of the war but ‘against the political errors’ showing that he believes that the government made serious mistakes that led to the death of thousands of soldiers seemingly unnecessarily. In addition the use of the word ‘sacrificed’ perhaps links the war to a more serious level, a sacrifice can often be made in devotion to a religion or cult, showing how glorified the war really was and that it was ranked as top priority for every man.

In the final paragraph Sassoon outlines his final protest ‘against the deception’ creating the image that the war has been smothered with lies, arrogance and conceit, he then shifts his focus to the people that the soldiers have left behind at home ‘ I may help to destroy the callous complacence…those at home regard the continuance of agonies…” this in a way accuses and lays blame on the public at home who do not question or witness the horror of the true war, highlighting perhaps that books, newspapers and information or letters from the soldiers themselves have been heavily censored and that they are all a victim of propaganda. The final phrase used by Sassoon indicates again that the public do not realize the harsh and cruel reality of the war ‘ the have not sufficient imagination to realize’ showing that the true happenings of the war are so dire and destructive that only those who have experienced it can truly understand.

Overall I have found that Sassoon employs a variety of literary tools in ‘A Soldiers Declaration’ in order to highlight the hostility of war and to convey his powerful emotions. He successfully uses strong adjectives and verbs to do so as well as the constant use of the personal pronoun ‘I’, which made the piece very intimate, almost like a memoir or diary entry. Also he conveys his opinions very strongly with the use of ‘I believe’ and ‘I am protesting’ this shows that he has rationally thought and analysed his emotions. It is clear that the piece is an unbiased, uncensored and realistic account as he is writing to tell the public and the politicians the true reality of the war and the suffering that the soldiers have encountered. He experienced the war himself, so the emotions conveyed are very real and he is most definitely not a pacifist, his intentions were to highlight the brutality of the war and to show his resentment towards it, and I feel as though he does so with an admirable style of writing and extremely skilfully.