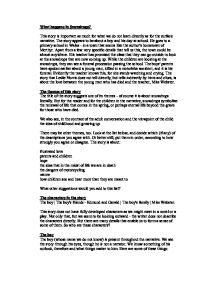 What happens in Snowdrops? This story is important as much for what we do not learn directly as for the surface narrative. The story appears to be about a boy and his day at school. He goes to a primary school in Wales - in a town that seems like the author's hometown of Merthyr. Apart from a few very specific details that tell us this, the town could be almost anywhere. His teacher has promised the class that they can go outside to look at the snowdrops that are now coming up. While the children are looking at the snowdrops, they can see a funeral procession passing the school. The boys' parents have spoken earlier about a young man, killed in a motorbike accident, and it is his funeral. Evidently the teacher knows this, for she stands watching and crying. The story that Leslie Norris does not tell directly, but tells indirectly by hints and clues, is about the love between the young man who has died and the teacher, Miss Webster. The themes of this story The title of the story suggests one of its themes - of course it is about snowdrops literally. But for the reader and for the children in the narrative, snowdrops symbolize the renewal of life that comes in the spring, or perhaps eternal life beyond the grave for those who have died. We also see, in the contrast of the adult conversation and the viewpoint of the child the idea of childhood and growing up. There may be other themes, too. Look at the list below, and decide which (if any) of the descriptions you agree with. Or better still, put them in order, according to how strongly you agree or disagree. The story is about: frustrated love parents and children hope the idea that in the midst of life we are in death the dangers of motorcycling nature how children see and hear more than they are meant to What other suggestions would you add to this list? ...read more.

(The story is set before the time when parents in the UK began to take their children all the way to school - and in doing so increased the danger from traffic by adding to it) "...by the fire station in case the doors were open" - this shows that the boy is interested in, or excited by, the chance to look at the fire engines. "...outside Jack William's garden" - we do not know if Jack is another child or an adult, but the detail suggests that the boy knows who lives in different parts of town: he belongs there. The author tries to show a sense of the boy's wonder at these things, and his expectation of adventure. His idea of adventure may seem very unremarkable to the teenage or grown-up reader - who may not be impressed by the idea of being given a glass marble or finding a silver medal for running. His innocence also appears in his idea that the police give rewards to people who find things and hand them in. Look at the passage for yourself. Can you see other details that are interesting? What do they suggest to you as you read the story? Leslie Norris's technique Viewpoint | Style - grammar | Style - vocabulary | Direct speech | Mood | Symbolism - the snowdrop | Attitudes | The author | Comparison | Implied meaning Viewpoint Maybe the most striking or important thing about this story is the point of view. That is, the author has chosen to tell the story about the boy, though it is Miss Webster to whom the most important event has happened. Or has it? Perhaps what we have here is the full story - which involves both the young teacher and her class - and the boy is best placed to see it all. For example, Miss Webster would not hear the comments made by adults like the boy's parents. ...read more.

and taking things for granted (Edmund) Can you think of any others? You can also, of course, compare this story with others that have a similar theme - stories about growing up, gaining independence and leaving home. Implied meaning Are there any things in the story that are not what they at first seem? Are there situations that are gradually revealed to be other than what first appears? Readers and reading Reading the text | Reading the author | Reading the Reading Reading the text Say what you think the story means in a literal sense and in terms of theme, character and setting. Look at details of imagery, language and symbolism. Reading the author Try to explain what, in your view, the author wants us to think at various points. In doing this you should refer to his narrative methods. Reading the reading Be prepared briefly to explain your own understanding of the story, and how this changes while you are reading it for the first time, and also on subsequent readings, where you notice more details. Responding to the story Retelling the story | Nature and symbols Retelling the story This story could be retold in other ways. You could for instance make it into a comic strip or storyboard for a TV drama. It could be retold as one or more first-person accounts from the adult characters. Perhaps we could write a report for the inquest of the young man who died. The boy in the story could tell it as a first-person account from an adult perspective, looking back (like the narrator of Chemistry). Nature and symbols Snowdrops are well known as a symbol of new life. But other natural things are also used commonly to symbolize, or comment on, things that matter to us as people. What do you associate with the things below? a rose the sun a butterfly a rainbow a tiger the sea a heart a lamb ...read more.