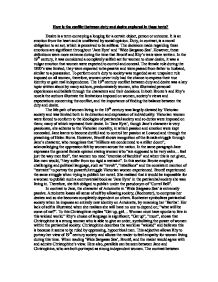 Duty and desire in Jane Eyre

How is the conflict between duty and desire explored in these texts? Desire is a term conveying a longing for a certain object, person or outcome. It is an emotion from the heart and is unaffected by social opinion. Duty, in contrast, is a moral obligation to an act, which is perceived to be selfless. The decisions made regarding these emotions are significant throughout 'Jane Eyre' and 'Wide Sargasso Sea'. However, these definitions were more extreme during the time that Bront� and Rhy's texts were written. In the 19th century, it was considered a completely selfish act for women to show desire, it was a vulgar emotion that women were expected to control and conceal. The female role during the 1800's was limited; they were expected to be passive and were passed from father to husband, similar to a possession. To perform one's duty to society was regarded as an unspoken rule imposed on all women, therefore, women never truly had the chance to express their true identity or gain real independence. The 19th century conflict between duty and desire was a key topic written about by many authors, predominately women, who illustrated personal experiences and beliefs through the characters and their decisions. In both Bronte's and Rhy's novels the authors illustrate the limitations imposed on women, society's views and expectations concerning the conflict, and the importance of finding the balance between the duty and desire. ...read more.

Jane's instinct for asserting herself was stifled, at a young age and so could only be expressed through defiance. Mrs Reed symbolizes society's view of female passion by likening Jane's traits to those of the devil and this is reiterated by Bessie who describes Jane's passion as "wickedness". After acting out Jane is given time in the red room to reflect, here she compares herself to a "rebel slave" and she realises that she had acted "as if... poisoned", illustrating that Jane is starting to comprehend Mrs Reed's narrow minded view. Helen Burns describes to Jane "the evil consequences" that result from not being dutiful and says "the bible teaches us to return good for evil". Through the opinions of Bessie and Helen Burns, Bront� interestingly portrays how society's view on desire had become ingrained within the female consciousness and how Jane may feel betrayed by other female characters. The view that desire may be linked with the devil is explored in 'Wide Sargasso Sea' as Rochester often describes 'Bertha' like a devil with "uncombed" hair and "eyes which were inflamed". It is suggested that because Antoinette, gives in completely to desire, Rochester is no longer able to understand her and so imposes a new identity, stating "Bertha Mason is mad". This is reinforced when Christophine provides an explanation for Antoinette's mother's madness; "they tell her she is mad", as though an identity has been forced upon her. ...read more.

she was left alone with her sick father and she recognised that it was her duty to stay with, and care for him. Later in 1854, after turning down his first proposal, Charlotte performed her duty to the patriarchal society by marrying Arthur Bell Nicholls and soon after she fell pregnant. It was said that she was then attacked by "sensations of perpetual nausea and ever-recurring faintness"* caused by severe morning sickness, which lead to her death. Therefore, even Charlotte Bront�'s life illustrates the conflict between duty and desire and the importance of finding the balance, as it was comforming to duty, many people believed, that killed her. Throughout the novels fire is a symbol of passion; similar to Antoinette's slave-like actions at the beginning of Bront�'s novel Jane calls herself a "rebel slave". However, the consequence of giving in to too much to passion is death, and this is shown in 'Wide Sargasso Sea' when 'Bertha' dies. As fire is symbolic of passion, both Rhys and Bront� illustrate how passion and desire can also kill you. Bront� illustrates her own belief through the decisions made by Jane; that the most important thing to consider when facing a conflict between duty and desire is yourself and the duty you owe to yourself. Although, Bront�'s opinion, in the past, may have been viewed as superficial and somewhat self-centred, the audience can form a different view when reading the text subjectively, as they have learnt of the struggles and limitations imposed on women. ...read more.

This is an excellent thought provoking essay which through a mixture of social, biographical and historical context increases understanding of the two protagonists in the novels. Some biographical information on Jean Rhys who wrote 'Wide Sargasso Sea' in mid 20th century and so had very different influences and experiences to Bronte would have been interesting. Well written and intelligently expressed with good use of well selected quotes: this is a superlative essay.