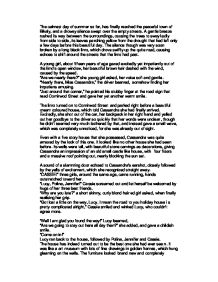 The calmest day of summer so far, has finally reached the peaceful town of Bikaly, and a drowsy silence swept over the empty streets. A gentle breeze rushed its way between the surroundings, causing the trees to sway lazily from side to side, its leaves parching yellow from the drought that had left only a few days before this beautiful day. The silence though was very soon broken by a long black limo, which drove swiftly up the quite road, causing echoes to shift around the streets that the limo had past. A young girl, about fifteen years of age gazed excitedly yet impatiently out of the limo's open window, her beautiful brown hair dashed with the wind, caused by the speed. "Are we nearly there?" she young girl asked, her voice soft and gentle. "Nearly there, Miss Cassandra," the driver beamed, somehow finding her impatiens amusing. "Just around that corner," he pointed his stubby finger at the road sign that read Comirwod Street and gave her yet another warm smile. The limo turned on to Comirwod Street and parked right before a beautiful cream coloured house, which told Cassandra she had finally arrived. Excitedly, she shot out of the car, her backpack in her right hand and yelled out her goodbye to the driver so quickly that her words were unclear, though he didn't seemed very much bothered by that, and instead gave a small wave, which was completely unnoticed, for she was already out of sight. Even with a five story house that she possessed, Cassandra was quite amazed by the look of this one. It looked like no other house she had seen before. ...read more.

Now all attention was on Cassie only, all of the girls' eyebrows raised, with a confused expression. "Come and have a look." This was the only way to make her friends stop thinking that she had gone mental. She led out of the room, closely followed by Lucy and the rest. "What do you mean changed?" Lucy asked, sounding more confused then ever. "Well there is like a different picture there now," Cassie replied yet this did not help Lucy to get everything straight but instead confused her even more. "Wha---"she began but broke into a silence. Her eyes widened with more confusion, as she glared in the room, at the painting of the new beautiful house. She stopped so suddenly that Jennifer and Polina ran right into her. "What the-" but they too had noticed the change and gazed from the painting to Lucy, waiting for some sort of explanation, though Lucy looked just as confused as they all did. After a long unpleasant pause, Lucy had seemed to find her voice back and quickly spat out something to do with the "New expansive house, new facilities and new designed things." "That's cool," Polina said, came through the door and in the room. Cassie followed her. In the room, something felt oddly wrong. It was icy cold and unpleasant, making Cassie shiver slightly. Polina must've felt the same for she backed away from the painting, her arms crossed and shivering. Lucy entered, followed by Jennifer, both looking rather uncomfortable. "It's rather chilly, don't you think?" Jennifer asked, her voice echoing across the empty room, as she stepped towards the painting and reached out to touch it. There was an unpleasant moment in which Jennifer's hand got closer to the drawing, then, unexpectedly, her finger barely on the frame, she leaped back, as if been struck by an electric shock, knocking over the painting on the left. ...read more.

They opened the door to the outside and shot out of it. Just as they were out they heard the door form behind the room blast open. Screaming the girl kept on running and unexpectedly heard a loud ear splitting noise coming form their right. Cassie span on her heels and at what she saw, she couldn't be more relieved. A small white car stopped right behind Jennifer, nearly crushing right into her and in the front seat sat Mrs Wilson, who looked very shocked, but no where near as shocked as the girls. They scrabbled into the car and shut the door while yelling "DRIVE," to Mrs Wilson whom knew that to obey would be the right thing to do, so she sped off on the road of Comirwod Street. Two weeks later... "Are you ok?" asked Mrs Wilson, anxiously, while eyeing her daughter. "Yeah," Cassie beamed and sat up slightly, to be able to make eye contact with her mother. She was more then alright... She was safe now, in a hospital, with her mother, and her friends, who were lying near by. The house had been burnt down, giving her more reasons to feel safe, yet she never found out who had been the teenage boy. Was it just a killer or the boy who got murdered, for she had clearly memorized him before leaving the house. The same face of the newspaper article and him. Its sounded impossible, and could've been her eyes tricking her, yet were they and was it really impossible? She didn't find out, for the police hadn't either. The day the police had arrived, they found nothing broken glass and blood, though the picture that turned back to the burning old house. That seemed pretty impossible too didn't it? So what is possible that could've happen? Nobody ever knew... By Kamila Nelson Contributed by: Sofia, Joey and Shetaal:) ...read more.