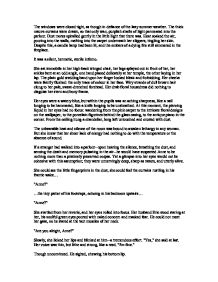 Eric was a stable, dependable man, a good man, but he was entirely transparent. To him, Anne was nothing less than an enigma. Whatever had become of their relationship of their marriage?

The windows were closed tight, as though in defiance of the lazy summer weather. The thick mauve curtains were drawn, so that only wan, purplish shafts of light permeated into the parlour. Dust motes spiralled gently in the little light that there was. Heat soaked the air, pouring into the walls, melting into the carpet underneath her slippers, tingling her skin. Despite this, a candle lamp had been lit, and the embers of a dying fire still simmered in the fireplace. It was a silent, hermetic, sterile inferno. She sat immobile in her high-back winged chair, her legs splayed out in front of her, her ankles bent at an odd angle, one hand placed delicately at her temple, the other laying in her lap. The plain gold wedding band upon her finger looked bleak and forbidding. Her cheeks were faintly flushed: the only trace of colour in her face. Wiry strands of dull brown hair clung to her pale, sweat-drenched forehead. Her drab floral housedress did nothing to disguise her stern and bony frame. Her eyes were a watery blue, but within the pupils was an aching sharpness, like a nail longing to be hammered, like a knife longing to be unsheathed. At this moment, the piercing liquid in her eyes had no focus: wandering from the pink carpet to the intricate floral designs on the wallpaper, to the porcelain figurines behind the glass casing, to the antique piano in the corner. ...read more.

Her eyes slid to the floor, to the smooth, enveloping carpet. Sweet muteness, collecting and engulfing the sound, the atmosphere. Collecting and engulfing. It could swallow her whole, embrace her, flood her into the soft silence of cloth, tear into her whole being. She would forsake Eric and the memory of his face. The face that buried itself in her lank hair each night. The face that pressed against hers in the throes of lovemaking. The face that turned away from her--whether in love or fear or sorrow or pity, she could not know. Eric longed for her to return to him, his plea constantly at the back of his tongue, but he resisted. Wherever she was, he believed that she was beyond him. He could feel her within him, like a heart palpitation, yet she was so remote that he could barely see her silhouette on the horizon. But he always felt her--acutely, unbearably, beautifully. The parlour was excruciatingly hot. Eric ran a trembling hand through his thick, dark hair, already doused with perspiration. The air was so heavy; he believed that if he lit a match, it would set the very air aflame. He wanted to thrust open the windows. But Anne must be handled delicately lest she break, like a dried flower. ...read more.

"He's gone. There's nothing we can do but to move on..." Anne reacted rapidly, seething with anger. "How can you say that when all you ever did was work? Work! Work! Work! You don't know what I'm feeling!." Eric squeezed his eyes shut, but the tears escaped anyway. They brimmed with the fear, the rage, the uncertainty, the shattered hope that he had been nursing since Shawn's death. "I miss him too, Anne" he finally said, his voice frail. I miss rubbing my hand in his fuzzy hair, playing with him in the sandbox in the backyard and his laughter... But I can't do this anymore. Can't there be something more for us, Anne? Can't you let me in so we can find something more together? You have me... Doesn't that count for something?" Anne's iron gaze and marble face softened, and a soft, swift pang reverberated in her heart. A sudden tenderness, senseless and very foreign to them both, overwhelmed them as she gently embraced him. "Maybe you're right. Maybe there can be something more..." Her smile was anaemic and unsure, but glazed with brilliance and hope sang and thrilled within Eric. As their embrace tightened, the heat broke upon their bodies like waves--crashing and renewing. Marriage - such a fragile thing, yet so bittersweet. But that eternal bond between the two parties that coexists in love through trial and triumph can bring a person through many trying times. ...read more.