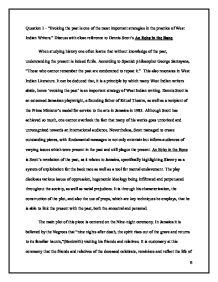 Evoking the past is one of the most important strategies in the practice of West Indian Writers. Discuss with close reference to Dennis Scotts An Echo in the Bone.

Question 1 - "Evoking the past is one of the most important strategies in the practice of West Indian Writers." Discuss with close reference to Dennis Scott's An Echo in the Bone. When studying history one often learns that without knowledge of the past, understanding the present is indeed futile. According to Spanish philosopher George Santayana, "Those who cannot remember the past are condemned to repeat it." This also resonates in West Indian Literature. It can be deduced that, it is a principle by which many West Indian writers abide, hence 'evoking the past' is an important strategy of West Indian writing. Dennis Scott is an esteemed Jamaican playwright, a founding father of Ritual Theatre, as well as a recipient of the Prime Minister's medal for service to the arts in Jamaica in 1983. Although Scott has achieved so much, one cannot overlook the fact that many of his works goes unnoticed and unrecognized towards an international audience. Nevertheless, Scott managed to create outstanding pieces, with fundamental messages to not only entertain but inform audiences of varying issues which were present in the past and still plague the present. An Echo in the Bone is Scott's revelation of the past, as it relates to Jamaica, specifically highlighting Slavery as a system of exploitation for the back race as well as a tool for mental enslavement. ...read more.

"... I suffer too long- three hundred years!" Crew remarks after he has killed Mr. Charles, he ranted that he was not going to be imprisoned. One may think that Crew's act was an act of breaking a cycle, proving to the white man that he was no longer the one in charge, and helping to finally emancipate his race. Walcott argues that it is necessary to wipe the slate clean to escape from "servitude to the muse of history." In analyzing the play, one is unable to overlook the fact that the characterization is indeed peculiar, most characters have multiple roles throughout the piece and this is not because the play was a low budget one, but instead to show the relation and connection between the characters in the present as well as the past, which is significant, but one must admit this can be a bit problematic, especially for someone reading the play and not watching it. However, one must realize that there is no separation between the characters and their ancestral past, as it determines their actions and who they will become. Note however, that Madame is the only character who maintains her role throughout the play's entirety, and this is not to be taken lightly. Madame represents a static character with dynamic proportions. In other words, even though she never changes her role, the role she plays has remained constant as the times changes around her. ...read more.

The chain represents a symbol of hanging from the institution of slavery. It does not move, it is the fixed backdrop, and is preset throughout every scene. Just highlighting the fact that the past haunts the present whether we want to believe it or not. Another significant prop would be the machete. The machete represented the plantation system, during slavery, where the black field slaves, worked the field for centuries cutting cane, to the benefit of the white planter. The machete in this case was used for the prosperity of the white man .Note keenly though that the same machete that was used for the prosperity of the white man was used for his demise. Crew committed a violent act when taking the machete to kill Mr. Charles, he was tired of the oppression, the dehumanizing, the emasculation he just wanted to end it, and that he did. An Echo in the Bone, is a true representation of 'evoking the past'. It is indeed evident that Scott takes a rather different approach in dramatizing and highlighting the need to visit ones past to figure out the present. This he was able to achieve through a complex set of variations, on the transformative power of role making, the plot construction as well as his selection of props. So after studying and analyzing the play, one is probably left contemplating the idea, does time really change? Or is it just a revelation of the past? ?? ?? ?? ?? 6 ...read more.