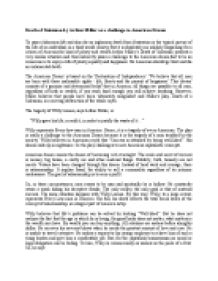 Examine &quot;Death of Salesman&quot; by Arthur Miller as a challenge to the American Dream

﻿Death of Salesman by Arthur Miller as a challenge to American Dream To pass a laborious life and also die an inglorious death from frustration is the typical picture of the life of an individual in a third world country.But it is absolutely an unlikely happening for a citizen of America,the land of plenty and wealth.Arthur Miller?s Death of Salesman presents a very similar situation and thus indirectly poses a challenge to the American dream,that to be an American is to enjoy a life of plenty,equality and happiness. No American should get lost and die an unlamented death. The American Dream' is based on the 'Declaration of Independence': 'We believe that all men are born with these inalienable rights - life, liberty and the pursuit of happiness.' ...read more.

American dream means the dream of becoming rich overnight. The scale and merit of success is money, big house, a costly car and other material things. Nobility, truth, honesty are not merits. Values have been changed through this dream. Instead of hard work and courage, there is salesmanship. It implies fraud, the ability to sell a commodity regardless of its intrinsic uselessness. The goal of salesmanship is to earn a profit. So, in these circumstances, man ceases to be man and spiritually he is hollow. He constantly wears a mask hiding his deceptive frauds. The only reality, the only goal is that of material success. The same situation happens with Willy Loman. By this way, Willy, to a large extent, represents Every Low-man in America. ...read more.

In fact, ?Death of a Salesman? is a red light for American society. It shows that all Americans adopt one million ideas and dream for success. Everyone wants to become the president of America, but when he fails to achieves his dreams, he becomes frustrated. Willy?s suicide is a caution for such modern values. Eugene O?Neil comments on the failure of American dream in following lines: ?I am going on the theory that the United States, instead of being the most successful country in the world, is the greatest failure? In conclusion we can say that Miller in ?Death of a Salesman? has tried to show the failure of American dream. Implicitly, he tells us tht man is not a machine, he has emotions too. Thus placing all the values on riches is wrong. The whole situation he sums up in Biff?s remark who says on his father?s death. ?He had the wrong dream. All, all wrong.? ...read more.