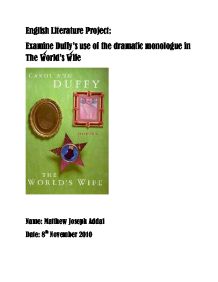 Examine Duffys use of the dramatic monologue in The Worlds Wife anthology.

English Literature Project: Examine Duffy's use of the dramatic monologue in The World's Wife Name: Matthew Joseph Addai Date: 8th November 2010 The dramatic monologue is a poetic technique which allows poets to create and develop a persona, who addresses the reader through the telling of a story through their perspective, portraying their inner thoughts and feelings in the process. This poetic technique is used by many well respected poets, including Carol Ann Duffy, a feminist poet whose "World's Wife" anthology consists of poems in which this technique can be found. The aim of this essay therefore, is to look at how effectively Duffy makes use of the dramatic monologue in this collection, taking the poems "Mrs Midas" and "Frau Freud" as examples. Upon glancing upon the names of these poems and the content within them, one picks up on two things. Firstly, both poems make reference to the names of male figures that are historically famous, with the first making reference to the famous Greek myth of King Midas, whilst the second makes reference to the famous psychoanalyst Sigmund Freud. Another similarity that can be picked up on between all both poems (through their respective titles), is the fact that Duffy has used the dramatic monologue to create female partners for the male figures mentioned above. Each wife's purpose is to re-tell the individual stories, ideals and situations associated with their husband's from their perspective whilst acting as their personal critics. ...read more.

Once again though, Duffy manages to preserve Mrs Midas' sense of satirical humor and irony through the lines "the kiss that would turn my lips to a work of art". This suggests that secretly, Mrs Midas would not mind being turned to gold, because at the very least, she would have many admirers. Unfortunately things become too unbearable for Mrs Midas, resulting in the physical separation of the couple. The development of this inability to cope is hinted upon, by the following line "My dream-milk burned in my breasts". The use of the metaphors "dream" and "burned" by Duffy, symbolizes Mrs Midas' passionate desire to have a child and tend to it, however she realize that this desire of bearing a child will be nothing short of a fantasy now. Some critics make the arguement that Duffy also plays a pun on the word "burned" here, with the second meaning referring to her growing bitterness towards her husband for his selfish actions. It can also be said that this is the first time Mrs Midas really gives the reader insight into her deeper thoughts and emotions, whilst at the same time openly displaying her sexuality. Duffy then portrays Mrs Midas as being the one who initiates this separation through the lines "So he had to move out", which presents Mrs Midas as an individual who will not play the role of the stereotypical wife when important decisions need to be made. The emotional ties between Mrs Midas and her husband are eventually cut , despite the formers' attempts to maintain what little remnants are left off their waning relationship. ...read more.

her attitude merely reflects her own opinion and view of men, and the way in which they express their sexuality, her husband not being any different. The last few lines of the poem can be said to be very effective in portraying the ferocity at which Mrs Freud has scathingly attacked the subject of male sexuality, leaving very little room for sympathy. The use of the word penis near the end of the poem, and Mrs Freud's description of it as "average" and "not pretty", can be said to show Mrs Fraud as getting to the heart of the issue, whilst at the same time, this clearly illustrates her as having stripped masculinity and her husband of their somewhat tough layers. The later personification of the penis as having an "envious solitary eye" and the following words "one's feeling of pity", is a twist on Freud's "penis envy" theory, something that according to Mary Greens' York Notes Advanced (2007), a feminist would say Duffy does "cleverly". This theory states that adolescent girls are envious of men due to them having a penis, and the use of the metaphor "envious solitary eye", suggests that it is rather men who are envious of women, and the second quote implies that Mrs Freud herself, pities her husband and all other men who believe otherwise. Bibliography Peter Cash,2002, Carol Ann Duffy: "The ultimate irony is that Midas possessed a magic touch all along: namely, the physical touch which had the power to transform her into a loving wife" , http://www.le.ac.uk/engassoc/publications/bookmarks/58.pdf Mary Green, 2007, York Notes Advanced ,http://www.yorknotes. ...read more.