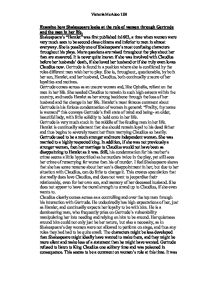 Examine how Shakespeare looks at the role of women through Gertrude and the men in her life.

Shakespeare’s “Hamlet” was first published in1603, a time when women were very much seen to be second class citizens and inferior to men in almost everyway. She is possibly one of Shakespeare’s most confusing characters throughout his plays. More questions are raised throughout the play about her than are answered. It is never quite known if she was involved with Claudius before her husbands’ death, if she loved her husband or if she truly even loves Claudius now. Gertrude is found in a position where she is conflicted by the roles different men wish her to play. She is, throughout, questionable, by both her son, Hamlet, and her husband, Claudius, both continually unsure of her loyalties and motives.

Gertrude comes across as an unsure woman and, like Ophelia, reliant on the men in her life. She needed Claudius to remain in such high esteem within the country, and needs Hamlet as her strong backbone through the loss of her husband and the change in her life. Hamlet’s most famous comment about Gertrude is his furious condemnation of women in general: “Frailty, thy name is woman!” this conveys Gertrude’s frail state of mind and being- an older, beautiful lady, with little solidity to hold onto in her life.

Gertrude is very much stuck in the middle of the feuding men in her life. Hamlet is continually adamant that she should remain loyal to his dead father and thus begins to severely resent her from marrying Claudius so hastily. Gertrude used to be a much stronger and more independent woman. She was married to a highly respected king. In addition, if she was not previously a stronger woman, then her marriage to Claudius would not have been as disappointing to Hamlet as it was. Still, his condemnation for his mother’s crime seems a little hypocritical as he murders twice in the play, yet still sees her crime of remarrying far worse than his of murder. I feel Shakespeare shows that she has some remorse about her son’s disappointment in her, but due to her situation with Claudius, can do little to change it. This creates speculation that she really does love Claudius, and does not want to jeopardise their relationship, even for her own son, and memory of her deceased husband. She does not appear to have the moral strength to strand up to Claudius, if she even wants to.

Claudius clearly comes across as a controlling and over the top man through his interaction with Gertrude. He undoubtedly has high expectations of her, just as Hamlet, and continually expects her loyalty to be with him. He is a domineering man, who frequently pries on Gertrude’s vulnerability manipulating her into needing and relying on him to be around. Her quietness around him could not only just be her nature, but also a necessity, as in Shakespeare’s day women were not allowed to perform on stage, and thus any roles they had had to be quite small. The characters might be less developed than Shakespeare might ideally have wanted to make them, and they might be more silent and make less of a statement than he might have wanted. Gertrude refused to listen to King Claudius one solitary time and was poisoned in consequence. This seems to be a comment on women’s role at this time. It was a necessity for women to obey their husbands, and if they don’t, the consequences were clearly great. She is simply a submissive woman who is stifled because of the male's controlling contumely. She receives no respect from Claudius. He commands her and says to her "Come, away" several times in the play, showing her little respect for her as a human never mind his wife. This is typical of this era.

Gertrude, just like Ophelia is continually influenced by the men in her life, being torn in different directions and, in the end, finds herself caught in the middle of a male feud, between the two men meant to love her undyingly. Still she remains a mysterious character, not understood by many, and riddled with ambiguity.