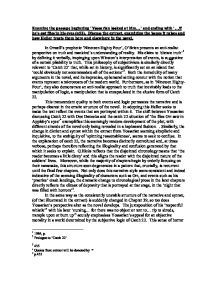 Examine the passage beginning 'Yossarian looked at him&amp;#133;' and ending with '&amp;#133;if he's got flies in his eyes (p52). Discuss the extract, examining the issues it raises and how Heller treats them here and elsewhere in the novel.

Examine the passage beginning 'Yossarian looked at him...' and ending with '...if he's got flies in his eyes (p52). Discuss the extract, examining the issues it raises and how Heller treats them here and elsewhere in the novel. In Orwell's prophetic 'Nineteen Eighty Four', O'Brien presents an anti-realist perspective on truth and mankind's understanding of reality. His claim to 'dictate truth'1 by defining it verbally, impinging upon Winston's interpretation of events, is suggestive of a certain pliability to truth. This philosophy of subjectivism is similarly directly relevant to 'Catch 22' that, while set in history, is significantly set on an island that 'could obviously not accommodate all of the actions'2. Both the incredulity of many arguments in the novel, and its imprecise, ephemeral setting concur with the notion that events represent a microcosm of the modern world. Furthermore, as in 'Nineteen Eighty-Four', they also demonstrate an anti-realist approach to truth that inevitably leads to the manipulation of logic, a manipulation that is encapsulated in the elusive form of Catch 22. This transcendent quality to both events and logic permeates the narrative and is perhaps clearest in the erratic structure of the novel. In adopting this Heller seeks to make the text reflect the events that are portrayed within it. ...read more.

Here the diction is ambiguous and yet scientific, as perhaps the reflection upon its 'spinning reasonableness' illustrates best. This oxymoron is applicable here because the catch is approached in an intellectual and not practical way. The conjunction with the nonsensical flies in Appleby's eyes further detaches the cause, Catch 22, from the effect that is described so vividly later in the novel. This initial conversation about the catch, the narrative of which contains no information about the physical location of the characters, contrasts sharply with the rich description of physical characteristics of Rome where 'insipid mist lay swollen the air'5. Instead of alluding to the catch's value as an ideal 'like good modern art'*, the later similes graphically describe 'tomblike' streets, and 'yellow bulbs' that 'sizzled in the dampness like wet torches'6. This dramatic shift to a narrative that is crudely littered with adjectives, can be seen as representative of the physical effect of Catch 22 so that 'nothing warped seemed bizarre any more.' It is here that 'shocking'* gritty realism eclipses the 'graceful' intellectualism that is catch 22. This shift does initially seem sudden, however if read closely, the extract does perhaps subtly allude to this. Yossarian's admiration for the 'perfect pair of parts' highlights the catch as a clever intellectual trick that is effective, rather as in Nineteen Eighty Four, because 'people believe that it exists'. ...read more.

of the sentence mirrors the actual nonsensical nature of the conversation, it can also be seen to allude to the blinding influence of patriotism, highlighting the fact that it is perhaps as illogical as the arguments of Yossarian that the Army seeks to dismiss. While the manipulation of logic by the Army to form Catch 22 does overtly criticise the mechanisms of war, it would be wrong to suggest the novel explicitly attacks War 'de facto'. The novel was seized upon for its anti war slant during the Vietnam war, however to view it as solely serving this purpose is but a naive appreciation of the text. Aspects of war are directly satirised, as through Milo's immoral capitalist opportunism. This is as a result of the expos� of other vices such as immorality and in particular, the abuse of logic. 'Catch 22' is not a stereotypical novel that goes from the sublime to the ridiculous but instead illustrates abuses of logic by employing the ridiculous. Heller achieves this, as with the 'flies in Appleby's eyes', by taking metaphors to the level of hyperbolic absurdities to exemplify the manipulation of logic that is Catch 22. The text is littered with such examples, exemplifying the process that leads to Yossarian's eventual confrontation of the realities in the 'night that was filled with horrors' in Rome. R. ...read more.

This student written piece of work is one of many that can be found in our AS and A Level Joseph Heller section.

Related AS and A Level Joseph Heller essays