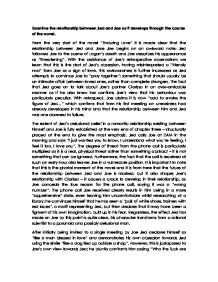 Examine the relationship between Jed and Joe as it develops through the course of the novel.

Examine the relationship between Jed and Joe as it develops through the course of the novel. From the very start of the novel "Enduring Love" it is made clear that the relationship between Jed and Jose Joe begins on an awkward note; Jed followed Joe to the scene of Logan's death and Joe describes his appearance as "threatening". With the assistance of Joe's retrospective observations we learn that this is the start of Jed's obsession, having misinterpreted a "friendly nod" from Joe as a sign of love. This awkwardness is further increased as Jed attempts to convince Joe to "pray together"; something that should usually be an intimate affair between loved ones, rather than complete strangers. The fact that Jed goes on to talk about Joe's partner Clarissa in an over-amicable manner as if he also knew her confirms Joe's view that his behaviour was particularly peculiar. With retrospect, Joe claims it is now "odd to evoke the figure of Jed..." ...read more.

The phone call Joe received clearly results in him being in a more "apprehensive" state, even leaving him uncomfortable whilst researching at a library; he convinces himself that he has seen a "pair of white shoes, trainers with red laces", a motif representing Jed, but then decides that it may have been a figment of his own imagination, built up in his fear. Regardless, the effect Jed has made on Joe by this point is quite clear, his character transforms from a rational scientist to a paranoid and possibly delusional man. After initially being invited to a single meeting by Joe Jed declares himself as "like a man blessed in love" and demonstrates his own obsession towards Jed using the simile "like a dog tied up outside a shop". However, this is juxtaposed to Joe's own view towards Jed; he bluntly confronts him saying "Who the fuck are you? What are you talking about?" using expletives to demonstrate his frustration towards Jed's attitude. ...read more.

This is further emphasised by the concluding sentence of the chapter, Joe decides he "needs a gun" - this is particularly surprising as we are used to his character being one of calmness and rationalism, him resorting to violence and weapons is a complete surprise, and a consequence of Jed's actions. In conclusion, the relationship between Jed and Joe begins as something no more than amicable, and despite Jed believing it transforming into a romance, it in fact actually goes onto become something of an annoyance to Joe and eventually endangers his own life, as well as Clarissa's, as seen in both the restaurant scene and in chapter 22 as Jed holds Clarissa hostage in her own house and is finally shot by Joe in the arm. Although this would suggest that the relationship between Joe and Jed has come to an end, though the second appendix, Jed's letter to Joe three years after being admitted to a mental hospital, makes clear through Jed's stream of consciousness that his delusions continue, he thanks Joe for loving him and exclaims that "faith is joy". Jed's love is enduring. ?? ?? ?? ?? ...read more.