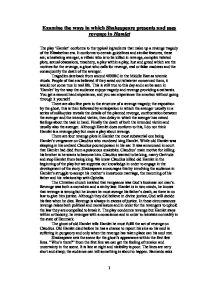 Examine the ways in which Shakespeare presents and uses revenge in Hamlet The play 'Hamlet' conforms to the typical ingredients that make up a revenge tragedy of the Elizabethan era. It conforms to certain guidelines and similar features, these are; a hesitating avenger, a villain who is to be killed in revenge, complex twisted plots, sexual obsessions, treachery, a play within a play, lust and greed which are the motives for the revenge, a ghost who calls for revenge, real or false madness and the consequently the death of the avenger. Tragedies date back from around 4000BC in the Middle East as totemic rituals. People of that era believed if they acted out whatever concerned them, it would not come true in real life. This is still true to this day and can be seen in 'Hamlet' by the way the audience enjoys tragedy and revenge providing a catharsis. You get a second hand experience, and you can experience the emotion without going through it yourself. There are also five parts to the structure of a revenge tragedy; the exposition by the ghost, this is then followed by anticipation in which the avenger usually in a series of soliloquies reveals the details of the planned revenge, confrontation between the avenger and the intended victim, then delay in which the avenger has mixed feelings about the task in hand. Finally the death of both the intended victim and usually also the avenger. Although Hamlet does conform to this, I do not think Hamlet is a revenge play but more a play about revenge. There are four revenge plots in Hamlet the most substantial one being Hamlet's vengeance on Claudius who murdered king Hamlet. While old Hamlet was sleeping in his orchard Claudius poured poison in his ear. It was announced in court that Hamlet had died from a poisonous snakebite. Claudius' main motive for killing his brother is he wants to become him. ...read more.

" Giving to you no further personal power to business with the king, more than the scope of these delated articles allow." Claudius tells his ambassadors not to fight just reason. " O cursed spite, that ever I was born to set it right". Hamlet finds it ironic that fortune should bear him such malice that he has to be the person that has to kill Claudius. Both the king of Norway and the king of Denmark are not heirs to their throne; both have had a palace revolution. Hamlet finds himself in the perfect situation to kill Claudius after the play scene. Claudius is kneeling down and Hamlet approaches him from and considers his vengeance. " Now might I do it pat, now he is praying; and now I'll do't - and so he goes to heaven; and so am I revenged. That would be scanned: A villain kills my father, and for that, I his sole do this same villain send to heaven". Hamlet decides not to kill Claudius whist he is praying, as this wouldn't be an appropriate vengeance, as Claudius would go to heaven. This is ironic as the king then says when Hamlet has left, "My words fly up, my thoughts remain below. Words without thoughts never to heaven go." "A brothers murder. Pray can I not". Here Shakespeare is giving the audience an insight into the psychology of Claudius' mind. Whether or not we are supposed to feel sympathy towards Claudius is doubtful but we do get to see him in a different perspective. Hamlet refrains from killing because he thinks Claudius is praying, the irony is Claudius cannot relieve himself of his guilt in order to pray. Hamlet believes the king must be engaged in a sinful act before he can take revenge, "when he is drunk asleep, or in his rage/ or in th'incestuous pleasure of his bed". ...read more.

It is clear Claudius would rather see his queen die then risk abandoning his plot. Laertes' realises the plan has backfired and in killing Hamlet he has also assisted Claudius in killing Gertrude. Laertes stays alive long enough to gain the forgiveness from Hamlet, unlike Claudius who dies before he can be forgiven for his sins. In this way although the play has a gruesome and unhappy ending, the Elizabethan audience would appreciate the fact that Claudius will go to hell for his sins but Laertes' and Hamlet will not. Revenge is presented by using a number of different sub plots of revenge, which can be compared to Hamlet's. Another son seeking revenge is Pyrrhus, when Troy was under siege by the Greeks; Pyrrhus went to avenge the death of Archillies his father. This is a parallel to the story of Hamlet, but Pyrrhus does kill his father's murderer Priam. Hamlet takes pleasure in telling the gruesome ways in which Pyrrhus killed Priam, wishing he could apply the story to Claudius' death. Although the story of Pyrrus is similar to Hamlet's and can be seen as a parallel, Shakespeare has purposely created two people that differ in character. Hamlet at all times throughout the play is aware of his conscience. He battles with himself by over evaluating the situation. Every time he has an opportunity to kill Claudius he seems to conjure up a feeling of doubt and uncertainty as to why it is the wrong moment. Hamlet has outlived most other revenge plays and is still immensely popular. The delay Hamlet shows before carrying out the act of revenge develops his character makes it easier for the audience to relate to him and makes him seem human. Shakespeare highlights the problems within a family through the use of revenge. Shakespeare's' use of language and imagery gives us an insight into the psychology of the characters involved. He uses contrasts between the different characters, their sub plots and the ways in which they deal with their own personal revenge and ties it all into one big concluding scene. 1 ...read more.