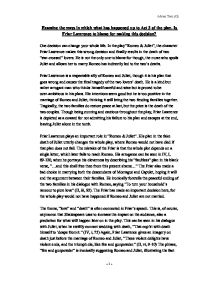 Examine the ways in which what has happened up to Act 3 of the play. Is Friar Lawrence to blame for making this decision?

Examine the ways in which what has happened up to Act 3 of the play. Is Friar Lawrence to blame for making this decision?

One decision can change your whole life. In the play “Romeo & Juliet”, the character Friar Lawrence makes this wrong decision and finally results in the death of two “star-crossed” lovers. He is not the only one to blame for though, the nurse who spoils Juliet and allows her to marry Romeo has indirectly led to the two’s deaths.

Friar Lawrence is a respectable ally of Romeo and Juliet, though it is his plan that goes wrong and causes the final tragedy of the two lovers’ death. He is a kind but rather arrogant man who thinks himself careful and wise but is proved to be over-ambitious in his plans. His intentions seem good but he is too positive in the marriage of Romeo and Juliet, thinking it will bring the two feuding families together. Tragically, the two families do restore peace at last, but the price is the death of the two couples. Though being cunning and cautious throughout the play, Friar Lawrence is depicted as a coward for not admitting his failure to his plan and escapes at the end, leaving Juliet alone in the tomb.

Friar Lawrence plays an important role in “Romeo & Juliet”. His plan in the fake death of Juliet utterly changes the whole play, where Romeo would not have died if that plan does not fail. The mistake of the Friar is that the whole plot depends on a single letter, which later fails to reach Romeo. His arrogance can be seen in IV, I, 89-120, when he portrays his cleverness by describing his “faultless” plan in his blank verse, “…and this shall free thee from this present shame…” The Friar also made a bad choice in marrying both the descendants of Montague and Capulet, hoping it will end the argument between their families. He ironically foretells the peaceful ending of the two families in his dialogue with Romeo, saying “To turn your household’s rancour to pure love” (II, iii, 92). The Friar has made an important decision here, for the whole play would not have happened if Romeo and Juliet are not married.

The theme, “love” and “death” is often connected in Friar’s speech. This is, of course, oxymoron that Shakespeare uses to increase the impact on the audience, also a prediction for what will happen later on in the play. This can be seen in his dialogue with Juliet, when he swiftly connect wedding with death, “That cop’st with death himself to ‘dcape from it.” (IV, i, 75) Again, Friar Lawrence gives an imagery on death just before the marriage of Romeo and Juliet, “These violent delights have violent ends, and the triumph die, like fire and gunpowder.” (II, vi, 9-10) The phrase, “fire and gunpowder” is ironically suggesting Romeo and Juliet, illustrating the fact that they both will die when they meet each other. The word “death” is used again when we first meet the Friar, who suggests plant can lead to death, “Full soon the canker death eats up that plant.” This tells the audience that at the end Romeo and Juliet with die because of the poison made by plants.

Even though it is the Friar who comes up with these plans that leads to the death of the two lovers, he is not the only one to blame for. The nurse of Juliet should take certain amount of responsibility. She allows Juliet to marry Romeo secretly, and covers her from Lady Capulet, which then lead to the final catastrophe. If she has told the Capulet elders about her love, Juliet would not have died. The parents of both families also are the indirect “murderer” of their son and daughter. If they understand more about their child and concern more about them, Juliet would not have faked her death and lead to the final disaster.

To conclude, it is the plan of Friar Lawrence that fails to achieve its purpose, which leads to the final misfortune. The uses of oxymoron and irony throughout the whole play suggest the deaths of the two “star-crossed” lovers at the end, and as suggested by the Friar, “Virtue itself turns vice being misapplied” (II, iii, 21), the poison has finally killed both Romeo and Juliet instead of saving them.