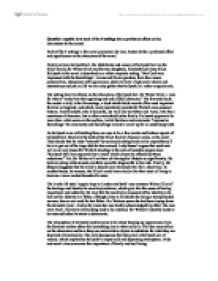 Question: explain how each of the 4 settings has a profound effect on the characters in the novel. Each of the 4 settings in the novel persuasion by Jane Austen holds a profound effect and significance on the characters of the novel. Firstly we have kellynch hall, the inhabitants and owners of kellynch hall are the Elliot family, Sir Walter Elliot and his two daughters, Elizabeth and Anne Elliot. Kellynch in the novel is described as a rather exquisite setting, 'Mrs Croft was impressed with the furnishings'. Lawns and flower gardens, from the owners personalities, obsessions with appearance, desire to have a high social stance and ostentatious outlook on life we can only gather that kellynch is a rather exquisite site. The setting heavily reflects on the characters of kellynch hall- Sir Walter Elliot, a man for whom "vanity was the beginning and end of [his] character." His favourite book, the reader is told, is the Baronetage, a book which holds record of the most important families in England, and which, most importantly records Sir Walter's own personal history, And Elizabeth, who is beautiful, yet vain like her father and Anne, who has a sweetness of character, but is often overlooked by her family. Kellynch appears to be more then what seems on the surface, lavish furniture and ornaments 'impressive furnishings' the ornaments and furnishings almost to cover up for an underlying truth. As kellynch is an old building there are sure to be a few cracks and broken aspects of kellynch hall. ...read more.

She from an unacknowledged charter has become everyone's confidant and mediator 'she was only Anne', 'Miss Anne you shall be able to set things right'. Uppercross values Anne more highly and kellynch, the family's good description is challenged with the description of kellynch's good furnishings. The description of Uppercross 'high walls' almost enclosing the family together in a unit were as kellynch's gardens and empty hall ways signify emptiness. The activities endured by Anne, on her trip to Uppercross is a far cry from the dull halls of kellynch. 'Lovely dinners', 'music and dancing'. Pathetic fallacy - another tool utilised to emphasise the effect of scenery on the characters. Through out Anne's time at Uppercross the weather seems to be autumnal, reflecting on Anne's feelings for captain Wentworth 'sweet scenes of autumn'. The object of the nut used further on in the novel as a metaphor for captain Wentworth's feelings towards Anne 'a glossy nut, blessed with original strength, beautiful, no weak spot anywhere'. At Uppercross there are many walks taken by the young group the party consists of the two Miss Musgrove's, Captain Wentworth, Mary, Anne, and Charles Musgrove. Anne's intention is to stay as out of the way as possible and just to enjoy the landscape and the day. Many hills and moors are mentioned these could represent the ups and downs of the emotions between Anne and Captain Wentworth. Walking may be a motif that is employed throughout Persuasion, when characters go for walks in the novel, it may often signal a period of character development. ...read more.