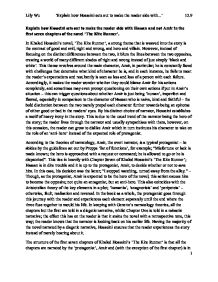 Explain how Hosseini sets out to make the reader side with Hassan and not Amir in the first seven chapters of the novel 'The Kite Runner'. In Khaled Hosseini's novel, 'The Kite Runner', a strong theme that is weaved into the story is the contrast of good and evil, right and wrong, and hero and villain. However, instead of focusing on the distinct differences between the two, it blurs the lines between the two opposites, creating a world of many different shades of right and wrong instead of just simply 'black and white'. This theme revolves around the main character, Amir, in particular; he is constantly faced with challenges that determine what kind of character he is, and in each instance, he fails to meet the reader's expectations and resultantly is seen as less and less of a person with each failure. Accordingly, it makes the reader wonder whether they could blame Amir for his actions completely, and sometimes may even prompt questioning on their own actions if put in Amir's situation - this can trigger questions about whether Amir is just being 'human', imperfect and flawed, especially in comparison to the character of Hassan who is naive, kind and faithful - the bold distinction ...read more.

This one phrase captures the utterly sincere and pure innocence of Hassan. It shows his devotion to Amir and his willingness to sacrifice anything for him. If the reader was not already on the side of Hassan, this is where they will convert; although the rape has not happened yet, it is easy to see Hassan's dedication to Amir. There is an innate instinct inside human beings to protect and care for children; Hosseini plays on this by portraying Hassan as the ultimate illustration of a child: obedient, almost foolishly trusting, kind, and happy. There is another example of irony in this; although Hassan is younger than Amir, he works so much more than the latter - he does all the work that an adult would be doing in 21st Century Britain; he has taken on all this responsibility, yet it is him that has a simple, happy life. There is a complete reversal of this in the character of Amir; although he does have to deal with an inadequate relationship with his father, he does not do any chores, has a servant, and physically, has no real responsibilities in comparison, yet it is him that acts older - it is him that lies, that deceives, that is cruel; "Kind of like when we used to play insect torture. ...read more.

In my opinion, Hosseini is very successful in persuading the reader to side with Hassan; he does it subtly, and does not force the decision onto the reader, but presents them with the truths, ironically through Amir, and allows them to make their own choices. His methods used to solidify the relationship between the reader and Hassan are effective and enhances the effect of the story itself. A good story by itself is only competent of drawing the attention of a reader, but it is also the depth in which the reader sinks into the book - a good author is able to manipulate a reader's mind into believing they are experiencing the story themselves, captivated, so they will cry for Hassan, and smile fondly at their friendship. The author has captured this, by making the characters so realistic, the reader feels obliged to side with one over the other. Hosseini has laid the foundations for an exquisitely written, intoxicating story, in just the first seven chapters. Add the rest of the book and any other books the reader reads after this, for a long time, will just seem insipid in comparison. ?? ?? ?? ?? Lily Wu 'Explain how Hosseini sets out to make the reader side with...' 12.9 1 ...read more.