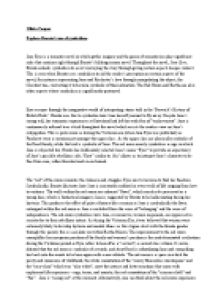 Explore Bronte's use of symbolism in Jane Eyre

﻿Olivia Cooper Explore Bronte?s use of symbolism Jane Eyre is a romantic novel in which gothic imagery and the genre of romanticism play significant roles that continue right through Bronte?s bildungsroman novel. Throughout the novel, Jane Eyre, Bronte embeds symbolism to assist conveying the story through giving certain aspects deeper context. This is seen when Bronte uses symbolism to aid the reader?s perception on certain aspects of the novel, for instance representing Jane and Rochester?s love through manipulating the object, the Chestnut tree, converting it to become symbolic of their adoration. The Red Room and Bertha are also other aspects where symbolism is significantly portrayed. Eyre escapes through the imaginative world of interpreting stories told in the ?Berwick?s History of British Birds?. Bronte uses this to symbolise how Jane herself yearned to fly away. Despite Jane?s strong will, her traumatic experiences at Gateshead had left her with fear of ?enslavement?. Jane is continuously referred to as a bird throughout the novel which assists the readers view on Jane?s subjugation. This is quite ironic as during the Victorian era (when Jane Eyre was published) as Parakeets were a common pet amongst the upper class. As the upper class are physically symbolic of the Reed family, while the bird is symbolic of Jane. ...read more.

Another aspect of symbolism, the chestnut tree, is vital in order to symbolise the love Jane Eyre and Mr Rochester have for each other. The day after Rochester proposes to Jane under "the great horse-chestnut at the bottom of the orchard," that same tree gets "struck by lightning in the night, and half of it split away". One interpretation believes that the chestnut tree is symbolic of Jane and Rochester?s love as it is deep rooted and entwined in with nature, they are honest with each other. Their love is natural and kept hidden away from society?s influence. It is the creation of God as it grows, develops and reproduces. The chestnuts of the tree are symbolic of their hearts, their shape is similar and the outside is unbreakable and defensive, as Rochester is to Jane. In spite of this, the direct split of the tree in the middle symbolises the disintegration of their love, yet also denotes their equality, despite society?s ideals, as the split is directly through the centre. On the other hand, another interpretation believes that the tree can be disputed that the tree not only represents their relationship, yet also Rochester as an individual. The tree symbolises the two devotees and their union, then the half that gets split away is Jane, who is driven away from Rochester by her own desire to evade enticement. ...read more.

One could also see Bertha as a manifestation of Jane?s subconscious feelings, specifically, of her rage against oppressive social and gender normalities. Jane announces her love for Rochester, but she also covertly fears marriage to him and feels the need to rage against the imprisonment it could become for her. Jane never manifests this fear or anger, however Bertha does. Thus Bertha tears up the bridal veil, and it is Bertha?s existence that stops the wedding. In addition, when Thornfield comes to symbolise a state of slavery and submission for Jane, Bertha burns it to the ground. Throughout the novel, Jane describes her inner spirit as fiery, her inner landscape as a ?ridge of lighted heath?. Bertha seems to be the outward manifestation of Jane?s interior fire. Bertha expresses the feelings that Jane suppresses. In conclusion, Jane Eyre relies heavily upon symbolism to have the context of the novel to be understood on a deeper level. Charlotte Bronte understands this, therefore the main aspects that would have otherwise been left unvalued by the ?reader?, are manipulated by the use of alliteration, e.g. the ?red room?, and the gothic imagery which plays a significant role in highlighting the true meaning of something that could be viewed as simple as the chestnut tree, to say. As a result, Jane Eyre is a compelling novel that allows the story to be appreciated as much as Bronte intended too. Word Count: 1,334 ...read more.