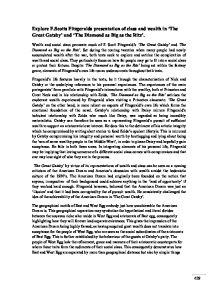 Explore F.Scotts Fitzgeralds presentation of class and wealth in The Great Gatsby and The Diamond as Big as the Ritz.

Fitzgerald employs a myriad of symbolisms, metaphors and similes to depict the sheer luxury and over exuberance of the aristocrats within both texts. Through these devices he is able to satirise the materialistic world the aristocrats inhabit, making it appear outlandish. In 'The Diamond as Big as the Ritz' John Unger, a boy from Hades with 'meager standards of living' is 'amused and delighted', by the luxurious lifestyle Percy and his family lead. When he arrives with Percy they are driven in what Percy dismissively calls a 'buggy'. However, the reader can extrapolate from John's reaction at the 'thousand minute tapestries of silk, woven with jewels' that the vehicle is far from an old buggy. In this instance John's amazement may have been employed to paradox Percy's dismissive attitude towards wealth as he refers to the luxurious car as 'old junk'. Fitzgerald may have used this paradox highlight the hollow nature of the wealthy, whose lives are fueled by consumerism to the extent that they place little value to the possessions everyone else would deem as extraordinary. In 'The Great Gatsby', Nick is also amazed by the wealth he experiences at the Buchanan home. ...read more.

Gatsby's vast wardrobe is a 'heavy defensive wall' consisting of 'thick silk' and 'expensive dye' which support the Marxist view of material possessions providing a barrier against hardship which the rich can hide behind. For Gatsby, and many others, material possessions help to protect their status in the same way the 'invisible cloak' of Gatsby's army uniform had hidden his lower class status when he first met Daisy. In general, the negative portrayal of consumerism in his work has made him very popular with Marxist writers. In conclusion, Fitzgerald uses 'The Great Gatsby' and 'The Diamond as Big as Ritz' to highlight the negative elements of wealth and class, whilst particularly emphasising that class roles will never be crossed. Both texts highlight the potential hazards of capitalist societies when one becomes consumed by materialism, placing greater importance on monetary fortune and status than the consequences of their actions. Although Fitzgerald presents both wealth and class in negative lights he reminds the reader that wealth alone does not give way to moral corruption hinting that it is wealth in conjunction with high social class that leads to the decaying of one's moral compass. 1 http://www.grin.com/en/e-book/94327/the-deconstruction-of-the-american-dream-in-the-great-gatsby ...read more.

This is a good essay demonstrating knowledge of both texts and a genuine engagement with the task in hand. Ideas are considered articulately and the writer can use embedded quotations fluently to support points. There are some points for improvement:
1) The essay ideally needs to be comparative throughout. Topic sentences at the start of paragraphs can establish clear comparative points for analysis.
2) There is good evidence of use of the text at times, but this needs to be more consistent, providing opportunity for detailed analysis.
3) Structurally, the biographical comments might be better placed near the end of the essay, enabling focused textual analysis earlier in the essay. Alternatively, relevant contextual references can be integrated into other points in the essay.