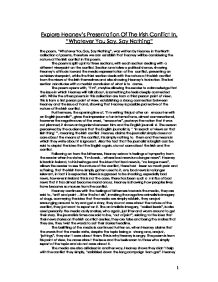 Explore Heaney's Presentation Of The Irish Conflict In, "Whatever You Say, Say Nothing" The poem, "Whatever You Say, Say Nothing", was written by Heaney in the North collection of poems, therefore we can establish that Heaney will be considering the nature of the Irish conflict in this poem. The poem is split up into three sections, with each section dealing with a different viewpoint on the conflict. Section one takes a political stance, showing Heaney's attitude toward the media representation of the conflict, presenting an outsiders viewpoint, while the third section deals with the nature of the Irish conflict from the views of the Irish themselves and also showing Heaney's frustration. The last section concludes with a morbid conclusion of what is to come. The poem opens with, "I'm", maybe allowing the reader to acknowledge that the issue in which Heaney will talk about, is something he feels deeply connected with. While the others poems in this collection are from a third person point of view, this is from a first person point of view, establishing a strong connection between Heaney and the issue at hand, showing that Heaney is possible protective of the nature of the Irish conflict. Furthermore, the opening line of, "I'm writing this just after an encounter with an English journalist", gives the impression of an informal tone, almost conversational, however the negative use of the word, "encounter", portrays the notion that it was not planned; it shows antagonism between him and the English journalist. ...read more.

The responses that some read, such as "They're murders", anger Heaney. He is annoyed at the fact that the people of his original country are being illustrated in such a malicious way, that people are condemning and judging these people with their sole evidence being words from a newspaper. The second section veers from the first and instead Heaney describes the frustration he feels towards the Irish people themselves. It starts with, "Religion's never mentioned here of course", meaning Northern Ireland. The sense of segregation is show with, "You know them by their eyes, and hold our tongue". It shows the detachment and separation in Ireland, how the Protestants and Catholics are so isolated. This is what the conflict has done. People are 'labelled', by their eyes and Heaney realises the absurdity of the situation when he states, continuing the conversational tone, "Christ, it's new time that some small leak was spung", he wants something to be done. He uses the metaphor of springing a small leak, to show that once this happens, once a small gap in created, it will converge into a larger one. One person needs to stand up and take lead so the others can come forward and break this chain of segregation that has been commencing for so long. The use of, "Christ", in Heaney's sentence allows the reader to see the cause of the conflict, religion. However, the word is used negatively as Heaney wants something to be done, even though the people are divided in religion, their common factor is, "Christ", so Heaney may be wondering why the divided factions cannot see this. ...read more.

This phrase is actually inscribed on the wall of Ballymurphy, which Heaney makes perfectly clear to the audience, showing that although throughout the poem Heaney has been stating this viewpoint, the life before death connotation is a united thought throughout Northern Ireland. As the poem draws to an end, Heaney states the depressing emotions experienced from the people of the conflict, "Competence with pain, coherent miseries". To the people, pain and misery is part of their lives now. Heaney almost lists the emotions, to show the extent of suffering that goes on. The poem finally concludes with, "We hug our little destiny again". It is noticeable that here Heaney changes the personal narrative and emerges himself with the Irish people with the use of, "we". The last sentence of one of unity, while "hug", brings the idea of warmth and security, their destiny is described as, "little", almost reminiscing that there is no hope, that if the conflict continues, there will be no encouraging ending. However despite that, the fact that the idea of unity and togetherness is shown via, "hug", does end the negative poem in a sense of hope, that maybe if they are united in the right context, they can hope for a better future. In conclusion, Heaney uses a variety of techniques and description to put across several perspectives on the Irish conflict. However, they all have one thing in common. The title is a fitting one, there is no unity, just a lack of security, everyone says nothing, as they are scared. Heaney ultimately wants a better future, but the question is, can Eire ever achieve one? 1 ...read more.