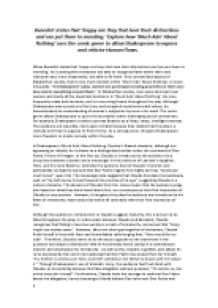 Explore how Much Ado About Nothing uses the comic genre to allow Shakespeare to expose and criticise Human Flaws.

The night before the wedding, Don John deceives both Don Pedro and Claudio into believing that Hero ?is disloyal? and has slept with another man. Don Pedro questions the allegation at first ?I will not think it? whereas Claudio is quick to believe it to an extent ?May this be so?? The fact Don Pedro is able to question the allegation shines a negative light upon Claudio who should not question Hero?s dishonesty. The audience feel frustrated with Claudio through Shakespeare?s use of dramatic irony, allowing the audience to know the truth that Hero is innocent, especially when Claudio rushes to plan his revenge, whereby he will ?wed, there will I shame her.? Women in Elizabethan times were objectified and became possessions of their husbands. They would not have attended school and their ?education would have been purely of domestic nature? in preparation for marriage. As men were seen as the superior figure that provided for him and his family, their pride and dignity meant the world to them. Therefore, to be a cuckold (a man married to an unfaithful wife) associated much shame and brought down the male?s social standing. ...read more.

For example, an Elizabethan man?s good name was of considerable worth to him and any action that tarnished it, would affect his social standing. However, Shakespeare highlights that ?susceptibility to pride and deception? and ?the inability to think before drawing conclusions? are major flaws found within the play and within Shakespearean society. It is through the comic genre that Shakespeare is able to portray his message that all of us, to some extent, have our own character-flaw(s) and it?s those who can fix them that benefit - like Leonato. Furthermore, as the audience watch ?Much Ado? About Nothing? and laugh at the character-flaws found within it, it makes them realise that their own character flaws can just as easily, be made fun of, as ?Comedy is intimidating and encourages complacency in those who laugh?. Many people have a fear of being laughed at because it makes them feel inferior. This is known as superiority theory, whereby people laugh at something or someone to make themselves seem superior. Due to this fear of being laughed at, people are more encouraged to fix the things that are comical, such as their human flaws. 1) Essay on The Accepted social more of Elizabethan times, 2) http://www.directessays.com/viewpaper/102401.html?utm_expid=174881- 1&utm_referrer=https 3) http://www.elizabethan-era.org.uk/elizabethan-women.htm 4) http://www.shmoop.com/much-ado-about-nothing/maturity-theme. ...read more.