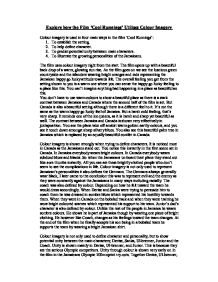 Explore how the Film 'Cool Runnings' Utilises Colour Imagery Colour imagery is used in four main ways in the film 'Cool Runnings': 1. To establish the setting. 2. To help define character. 3. To predict potential unity between main characters. 4. To illustrate the growing personalities of the Jamaicans. The film uses colour imagery right from the start. The film opens up with a beautiful back drop of a warm, glowing sun rise. As the film goes on we see the luscious green countryside and the islanders wearing bright oranges and reds representing the Jamaican happy go lucky attitude towards life. The overall feeling you get from the setting shown to you is a warm one where you can sense the happy go lucky feeling to a place like this. You can't imagine anything bad happening in a place as beautiful as this. ...read more.

In Jamaica everybody wears bright colours. In Canada everybody wears subdued blues and blacks. So when the Jamaicans un-board their plane they stand out like sore thumbs instantly. All you see are these brightly clothed people who don't seem to see the complications in life. Colour imagery is not only used to represent Jamaican's personalities it also defines the Germans. The Germans always generally wear black, I later came to the conclusion this was to represent evil and the enemy as they were constantly against the Jamaicans in many ways including racially. The coach was also defined by colour. Depending on how he felt toward the team he would dress accordingly. When Derise and Sanka were trying to persuade him to coach them he was dressed in sombre blues which represented his hostility towards them. When they were in Canada on the bobsled track and when they were training he wore bright coloured scarves which represented his support to his team. ...read more.

At the meeting for the bobsled team selection the final team is dressed in different styles of red tee-shirts, showing they are united once again. In Canada Junior unites the team with the coach by giving him a Rastafarian hat. Unity is not only showed between characters but between the characters and the Olympics. When the Jamaicans go to buy snow clothes they buy the Olympic colours; red, yellow, green, blue and black. Finally colour imagery is used to show the growth of professionalism within the team. At the beginning where they first see a sled and try to ride one, they are all wearing ridiculous clothes and colours. As they progress they're colours are tamed down and at the very end they have a professional bobsledding uniform. Representing they're country's colours. In conclusion it is obvious that colour imagery is used throughout the film in many different aspects. We are shown through colour imagery, the mood of settings, the definition of characters, how the team unite throughout the film, and how the Jamaicans personalities grow and adapt to each of their surroundings. ...read more.