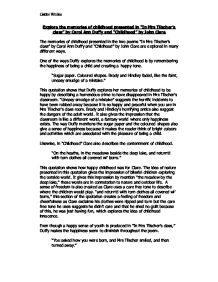 Explore the memories of childhood presented in &quot;In Mrs Tilscher's class&quot; by Carol Ann Duffy and &quot;Childhood&quot; by John Clare

Duffy also creates a feeling that the children look towards Mrs Tilscher for comfort but they both feel that it is time to move on in the direction of growing up. Duffy does this by making the child try on last attempt to stay in the safeness and secure, safe womb of the primary school. As Mrs Tilscher turns away is signifies the fact that her time is over teaching this particular class. This conveys a sense that joyfulness is slipping away. "A rough boy told you how you were born." This quotation shows the "rough boy" who reveals how you were conceived is another sign of maturity. For children it is like finding out there is no Father Christmas. It gives the impression that life won't be the same again. The structure of the two poems, is different. In "Childhood," Clare has created a regular rhyme scheme to the poem. "O dear to us ever the scenes of our childhood The green spots we played in the school where we met The heavy old desk where we thought of the wild-wood Where we poured o'er the sums which the master had set." ...read more.

"There's nought to compare to the days of our childhood." This quotation suggests that nothing is as good as childhood and it was obviously an exciting part of life for Clare. It also makes the reader feel as if that is the end, there was no moving on to a different stage of life or growing older into a teenager. Clare creates this feeling by saying nothing compares to his childhood giving the impression that his teenage and younger life was not as exciting and stimulating as his childhood days. It is as if Clare wanted childhood to be everlasting. Likewise in "In Mrs Tilscher's class," there is also a sense of closure. "Reports were handed out. You ran through the gates, impatient to be grown," This quotation also gives the impression of the ending of being in Mrs Tilscher's class, as Duffy mentions reports were handed out, this usually happens at the end of an academic year, which makes the reader think of a new teacher and a new class. It also creates a sense of moving on to another year of school. It suggests that there is more to come of life but not as in childhood, in more of an adult nature. A feeling of finishing is also created. ...read more.