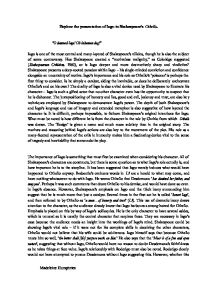 Explore the presentation of Iago in Shakespeare's Othello.

Explore the presentation of Iago in Shakespeare's Othello. "O damned Iago! Oh inhuman dog!" Iago is one of the most central and many-layered of Shakespeare's villains, though he is also the subject of some controversy. Has Shakespeare created a "motiveless malignity," as Coleridge suggested (Shakespearean Criticism, 1960), or is Iago deeper and more destructively sharp and vindictive? Shakespeare presents a deep-rooted paradox within Iago - his single-minded conviction and confidence alongside an uncertainty of motive. Iago's importance and his role as Othello's 'poisoner' is perhaps the first thing to consider. Is he simply a catalyst, aiding the inevitable, or does he deliberately orchestrate Othello's end on his own? The duality of Iago is also a vital device used by Shakespeare to illustrate his character - Iago is such a gifted actor that no other character even has the opportunity to suspect that he is dishonest. The juxtapositioning of honesty and lies, good and evil, jealousy and trust, are also key techniques employed by Shakespeare to demonstrate Iago's power. The depth of both Shakespeare's and Iago's language and use of imagery and extended metaphor is also suggestive of how layered the character is. It is difficult, perhaps impossible, to fathom Shakespeare's original intentions for Iago. ...read more.

The move to Cyprus also presents another side of Iago. In Venice, he was skulking in shadows and calling up at windows, while in Cyprus, he seems free to observe and destroy without hindrance. Shakespeare presents a kind of uncertainty within Iago, and the playwright's motives for him are unclear. Is it true that Othello has 'done [Iago's] office 'twixt [his] sheets', or has Iago convinced himself of this to give himself a motive? It could be that Shakespeare intends Iago to be motiveless - no more than a construct to represent the unfathomable evil that is inside every human. Although Iago proclaims 'I do hate [Othello] as I do hell-pains', we are never given a clear reason why. If Shakespeare is using him as a general symbol of evil, it may be that he did not want him to have a reason; it does not matter why, only that his hatred is so strong, so powerful, and so extreme, that it is all that is driving him. In some ways, a motiveless evil is more frightening and more powerful than one with a reason. However, it is also possible that Iago is a many-layered creation, and as such has multiple motives. Primarily, it could be said that Iago is driven by jealousy - stronger and more general jealousy than Othello's, and perhaps this helps him to feed the Moor's obsession. ...read more.

Despite this, he still seems to dominate the exchange; he is the only one who knows everything that has happened, and he is now almost the sole topic of conversation. He is referred to, strangely, as a 'Spartan dog' (V.2), which seems to be a strange paradox. The Spartans were a proud, brave and terrible people, while 'dog' implies a lowly, fearful, evil creature. It is possible that his bravery, cunning and maliciousness matches the Spartans, while he darker, subtler side is that of a dog. Iago is possibly what makes Othello so different from other Shakespearean tragedies. While every other tragic hero inevitably falls because of one fatal flaw, in Othello there is still a 'what if?' remaining. What if Iago is taken out of the picture? Would the General's demise have been so sudden and striking? Would it have happened at all? Iago is an instrumental plot device, the key to the poignancy of the tragedy. In Iago, Shakespeare has created an absolute villain, one that the audience perhaps cannot feel sympathy for. In some ways, this is because he is so utterly callous and inhuman that the audience cannot comprehend his motives. And yet, there is always the dark uncertainty that the reason Iago is so powerfully evil is because he represents all the envy, desire and malignity that every human possesses. ?? ?? ?? ?? Madeleine Humphries ...read more.

This is an extremely strong essay that shows impeccable analytical skills and a very thorough understanding of the play, the characters and the effects that are created by various techniques employed by Shakespeare.

Points are well explored and supported with textual evidence and the essay is well structured and fluent.