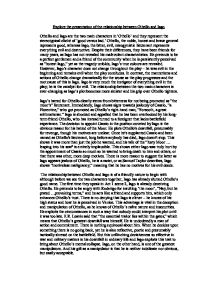 Explore the presentation of the relationship between Othello and Iago

Explore the presentation of the relationship between Othello and Iago Othello and Iago are the two main characters in 'Othello' and they represent the stereotypical clich� of 'good versus bad.' Othello, the noble, honest and brave general represents good, whereas Iago, the bitter, evil, misogynistic lieutenant represents everything evil and destructive. Despite their differences, they have been friends for many years, as Iago has not revealed his malevolent characteristics. He pretends to be a perfect gentlemen and a friend of the community when he is persistently perceived as "honest Iago," yet as the tragedy unfolds, Iago's true colours are revealed. However, Iago's character does not change throughout the play - he was evil in the beginning and remains evil when the play concludes. In contrast, the mannerisms and actions of Othello change dramatically for the worse as the play progresses and the root cause of this is Iago. Iago is very much the instigator of everything evil in the play; he is the catalyst for evil. The relationship between the two main characters is ever-changing as Iago's plot becomes more sinister and his grip over Othello tightens. Iago's hatred for Othello clearly stems from bitterness for not being promoted as "the moor's" lieutenant. Immediately, Iago shows signs towards jealousy of Cassio, "a Florentine," who got promoted as Othello's right-hand man, "Forsooth, a great arithmetician." ...read more.

By the middle of Act 3, when Iago's poison is clearly working and Othello's mind has turned, the dialogues between the two are often so rapid that they could be enacted as the expansive thoughts of a single mind at war with itself. Othello is thinking the worst, calling for blood and disregarding all pretences of reflection, which is a total contrast to his former self. After finding out the false truth, Othello seemed to have become the master of taking things to the extreme, "O, blood, blood, blood!" and becomes equally good at making rash decisions, "That Cassio's not alive." The relationship between Othello and Iago is at its most crucial in Act 3 scene 3, in which Iago convinces Othello of the affair between Cassio and Desdemona. This scene dramatically highlights Iago's status in the relationship between himself and Othello. At first, he exploits Othello's insecurity by planting a seed of doubt in Othello's mind after seeing Cassio innocently walking away, "Ha! I like not that." G. Salgado describes this innocent-seeming half-line as 'the first poisonous drop in the hellish brew concocted by Iago.' Immediately Othello inquires into what he means and Othello's insecurities shine through. Iago manages to establish his mastery and Othello fast becomes the underdog. The unerring trust that Othello has in Iago is vital in their relationship as it enables Iago to work his witchcraft without fear of getting found out. ...read more.

Othello is an outsider and he has an outsider's insecurities. On one level Iago is playing on those insecurities; on another, Iago is that devilish part of Othello's mind that houses those insecurities. Their dialogues in the later scenes of the play reflect the lack of stability of someone who has lived too long in his own mind, and whose sense of reality and actuality has become almost completely internal. The extraordinary relationship that exists between the traumatic, noble moor and the cunning, deceitful misogynist finally collapses after Iago's villainous plot is revealed, albeit after Othello has murdered his wife. He eventually stabs Iago, leaving him wounded but not dead and describes him as a "demi-devil." After subsequently stabbing himself, he falls down on Desdemona and dies. The once powerful, poetic leader of men has fallen into a world of agony and turmoil due to a unique relationship with a villainous "Spartan dog." To some extent, it is possible that Iago is not even necessary in those final scenes for the tragedy to take place due to the inhuman emotional state that Othello was sustaining. Even at the end of the play, Iago holds the power by refusing to give Othello any reasons for his evilness, "I bleed sir, but not killed." This shows the almost unimaginable effect that Iago must have had on his mind, and Othello, by this stage of the play, would be quite capable of creating his own Iago if the real one were suddenly to withdraw. ?? ?? ?? ?? ...read more.