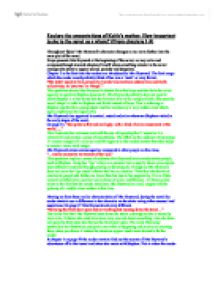 Explore the presentations of Keith's mother. How important is she to the novel Spies as a whole? (From chapters 1-9)

Explore the presentations of Keith's mother. How important is she to the novel as a whole? (From chapters 1-9) Throughout 'Spies' Mrs Hayward's character changes as we move further into the main plot of the novel. Frayn presents Mrs Hayward at the beginning of the novel, as very calm and composed though towards chapters 8 and 9 when something sinister in the novel emerges she starts to appear scared, panicky and desperate. Chapter 2 is the first time the readers are introduced to Mrs Hayward. The first image which the reader would probably think of her was a 'snob' or very formal. "She didn't speak to him personally, but she'd sometimes address him and Keith collectively, as 'you two' or 'chaps'." This quotation shows Mrs Hayward is distant from the boys and she feels she is too superior to speak to Stephen personally. Mrs Hayward probably does not want to admit Stephen is at her house but she tolerates him as he occupies Keith. She uses the word 'chaps' to refer to Stephen and Keith instead of boys. This is referring to Stephen and Keith as young adults and the vocabulary is very middle class which again emphasises her superiority. ...read more.

In chapter 5 on page 93 the reader starts to find out the secrets of Mrs Hayward's adventures off to the tunnel and when she meets with Stephen. This is when the reader sees a different side to Mrs Hayward which at first the reader would never have guessed. "So you see I'm trusting you". Mrs Hayward is addressing Stephen directly and talking at his level, which is very unusual as she would normally only talk to him through Keith. Now Mrs Hayward is even trusting Stephen, this shows Mrs Hayward must be very desperate and all her superiority has gone as she wants to save herself being found out of her adventures by Mr Hayward. Further on, on the same page as before the reader realises that Mrs Hayward is no longer perfect. "After she's gone I remember the back of her dress as she clambered awkwardly away from me along the passageway, its calm simplicity confused by the dust of the bare earth, its elegant regularity mocked by the random detritus of dead leaves and twigs hanging from it." The first section of this quotation with her clambering awkwardly shows she has left behind her perfect way of walking and clambering is something which children tend to do more than adults. ...read more.

The words 'silently shaking' is alliteration and stands out much more, this effect makes it more dramatic for the reader too. The way Mrs Hayward is portrayed throughout this chapter by Stephen, who uses emotive language or detailed descriptions etc makes the reader feel a sense of empathy towards Mrs Hayward. The reader can certainly see how helpless Mrs Hayward now is and how she is far away from being in control of her family like she once was. Mrs Hayward defiantly plays an important role in the story as her personal matters and adventures are one of the main plots of the story. I think Mrs Hayward is actually a lovely person. She appears to the reader at first rude and arrogant but that was the way the middle class parents acted in that period of time. Later the reader sees her other personality and how she copes with the situation. It is interesting how at first Mrs Hayward would never dream of lowering herself to talk to Stephen and later in the story she trusts him with a huge secret. I like the way Frayn describes Mrs Hayward when she is in a desperate state as it makes the reader feel a sense of different emotions towards the character while reading the novel. Key: Key point: ----------- Evidence: ----------- Analysis: ----------- ?? ?? ?? ?? ...read more.