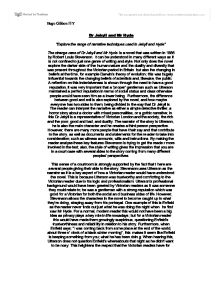 Explore the range of narrative techniques used in Jekyll and Hyde

Dr Jekyll and Mr Hyde "Explore the range of narrative techniques used in Jekyll and Hyde" The strange case of Dr Jekyll and Mr Hyde is a novel that was written in 1886 by Robert Louis Stevenson. It can be understood in many different ways as it is not confined to just one genre of writing and style. Not only does the novel explore the darker side of the human nature and the duality and diversity that was present throughout the Victorian period in Britain but also the changing in beliefs at the time, for example Darwin's theory of evolution; this was hugely influential towards the changing beliefs of scientists and, likewise, the public. A reflection on this indecisiveness is shown through the need to have a good reputation, it was very important that a 'proper' gentleman such as Utterson maintained a perfect reputation in terms of social status and class otherwise people would have seen him as a lower being. Furthermore, the difference between good and evil is also explored by the novel, and how maybe everyone has two sides to them; being divided in the way that Dr Jekyll is. The reader can interpret the narrative as either a simple detective thriller, a horror story about a doctor with mixed personalities, or a gothic narrative; in this Dr Jekyll is a representative of Victorian London and the society, the rich and the poor, good and bad, and duality. ...read more.

When hearing this, Utterson does not question Enfield's whereabouts that night as he didn't want to be nosy. This heightens the respect that the Victorian readers have for Utterson as nosiness was considered a bad trait. The fact that Stevenson is building up trust for Utterson is important as we learn a lot about the plot and opinions in the novel through him. Utterson is the base at which the Victorian reader would have judged people on and hypothesized the different aspects of information as they were brought up. It is through him that the reader can read between the lines as to what the novel might be trying to express about Victorian life. Another important character in the novel is Mr Hyde. It is Hyde who ties strongly with Darwin's The Origin of Species and the idea that there was a missing link in evolution. At this point in time Victorians were only just getting over the fact that science had proved religion wrong therefore they were stunned as to what to believe. This uncertainness would have scared even the highest-minded gentleman and Stevenson is attacking that fear by making Hyde look like the missing link in evolution. His hideously deformed and discreet appearance adds to his mysteriousness as a character. ...read more.

The descriptions of London that Stevenson uses are to set the scene as well as give a sense of atmosphere and suspense. He uses a wide range of literary techniques to try and expose the character's feelings as well as what the reader should expect from either this chapter or setting. Dr Jekyll and Mr Hyde's house is also an important literary device. It is used as a trope as it is a recurring image of the duality in society as well as the fact that Utterson always refers to it in the novel. The building represents Hyde in the way that it sticks out from the other buildings in the way that Hyde sticks out from society. Whereas all the other buildings are discreetly modest in appearance, this building is described as ugly and bland as if it is not well looked after. This is shown when Utterson describes it as a "Sinister block of building thrust forward its gable on the street." Stevenson uses the building as a metaphor for Hyde as he stands out from society in the same way that this building apparently thrusts forward from the others as if it too is separate. This is in addition to the obvious fact that the building is abnormally ugly which is the same case with Hyde. ?? ?? ?? ?? Hugo Gibbon 11Y ...read more.