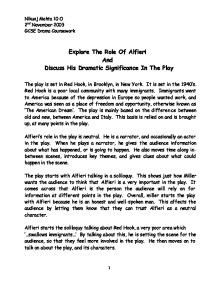 Explore The Role Of Alfieri And Discuss His Dramatic Significance In The Play.

Nikunj Mehta 10 O 2nd November 2003 GCSE Drama Coursework Explore The Role Of Alfieri And Discuss His Dramatic Significance In The Play The play is set in Red Hook, in Brooklyn, in New York. It is set in the 1940's. Red Hook is a poor local community with many immigrants. Immigrants went to America because of the depression in Europe so people wanted work, and America was seen as a place of freedom and opportunity, otherwise known as 'The American Dream'. The play is mainly based on the difference between old and new, between America and Italy. This basis is relied on and is brought up, at many points in the play. Alfieri's role in the play is neutral. He is a narrator, and occasionally an actor in the play. When he plays a narrator, he gives the audience information about what has happened, or is going to happen. He also moves time along in-between scenes, introduces key themes, and gives clues about what could happen in the scene. The play starts with Alfieri talking in a soliloquy. This shows just how Miller wants the audience to think that Alfieri is a very important in the play. It comes across that Alfieri is the person the audience will rely on for information at different points in the play. Overall, miller starts the play with Alfieri because he is an honest and well-spoken man. ...read more.

Alfieri is forced to tell Eddie the specifics of the law, and try to persuade him in this way. It is clear to see that Alfieri changes character from being a friend giving advice, to a lawyer stating the law. However, he still empathises with Eddie, which Eddies sees as Alfieri talking his side. The second meeting between Eddie and Alfieri starts with a short soliloquy. In this soliloquy, Alfieri brings up the point that it is inevitable that Eddie will report Rodolfo and Marco to immigration. This again brings up the idea that Eddie's role, is similar to one in a Greek tragedy, he is unfortunate, and nothing can stop him from what he is going to do. The next thing that Alfieri brings up, is that he repeats the simile, '...his eyes were like tunnels...' Alfieri said this simile in his first soliloquy. It shows that Eddie has not changed, and he is still determined, and that Alfieri cannot say anything to Eddie that will change him from reporting the immigrants. It also gives the impression to the audience that the meeting between the two are completely pointless, because Eddie isn't taking any advice been given to him. The actual meeting begins by Alfieri responding to Eddie's questions, with questions. By using this method to respond to Eddie, Alfieri is making Eddie think and see for himself. ...read more.

He is clearly stating that there is no argument. Later in the meeting, Alfieri says, '...this is not God, Marco, you hear? Only God makes justice...' He is telling Marco that he has not got any power and he can't do anything about this. Although Marco is told this, he can't accept this, because he, like Eddie, is determined to make justice and kill Eddie. The play finishes with a short soliloquy by Alfieri at the very end. Alfieri uses this soliloquy to tie up all the events in the play, and then he gives his opinion on those events. In the first line of his soliloquy, Alfieri repeats the line from earlier on in the play, in his first soliloquy '...most of the time now, we settle for half and I like it better...' The audience are made to think that the whole play actually centres around this quote. With the audience realising this, they now realise that Alfieri has brought everything back to the present. Alfieri reflects on the audience's thoughts. Without Alfieri's soliloquy at the end, the audience would be left hating Eddie. Miller uses Alfieri's connection with the audience to make the audience feel sympathy for Eddie. In the soliloquy, Alfieri ties up all the lose ends and clears up any questions the audience might have about the play. The audience are brought back to the present, which in turn reminds them of Alfieri's memory. 1 ...read more.