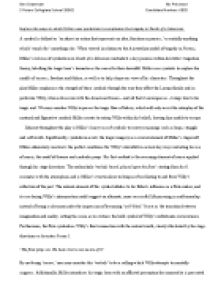 Explore the ways in which Miller uses symbolism to emphasise the tragedy in Death of a Salesman.

﻿Ben Grantham Ms Pritchard S Peters Collegiate School 20962 Candidate Number: 6055 Explore the ways in which Miller uses symbolism to emphasise the tragedy in Death of a Salesman. A symbol is defined as ?an object or action that represents an idea, function or process,? essentially anything which ?stands for? something else. When viewed in relation to the Aristotelian model of tragedy in Poetics, Miller?s rich use of symbolism in Death of a Salesman contradicts a key premise within Aristotle?s tragedian theory, labelling the tragic hero?s hamartia as the cause for their downfall. Miller uses symbols to explore the motifs of success, freedom and failure, as well as to help shape our view of his characters. Throughout the play Miller emphasises the strength of these symbols through the way they affect the Loman family and in particular Willy, whose obsession with the American Dream ? and all that it encompasses ? brings him to his tragic end. We may consider Willy to posses the tragic flaw of hubris, which will only assist the interplay of the material and figurative symbols Miller creates to entrap Willy within his beliefs, leaving him unable to escape. Inherent throughout the play is Miller?s heavy use of symbols to convey meanings such as hope, struggle and self-worth. ...read more.

This peripheral is sharply contrasted by Miller?s references to the ?jungle? through Ben, who despite being dead before the play begins, remains a big influence to Willy and his search for capitalism. The jungle?s symbolic connotations of ?wild freedom? and ?liberty? epitomises all that opposes the American dream. One could also argue that they represent the opportunities Willy rejected due to his hubris, his uncompromising faith in the American dream. Rollyson explores this idea and states ?Willy is only as solid as the society in which he tries to sell himself,? and everything from his view of America as ?the greatest country in the world? to his idolisation of ?David Singleman? suggests that the American dream is something he is deeply ?sold? into. Through Miller?s use of a non-linear narrative, the audience gains a greater understanding of the way symbols are established and the development of the setting in which they manifest. Willy?s recollection of the past makes us aware that the apartment buildings replaced their natural surroundings, most notably the ?two beautiful elm trees,? the presences of which echo through the repeated appearance of leaves around their home. The construction of the apartment buildings has rendered their neighbourhood lifeless, and Willy?s statement ?The grass don?t grow any more? may reflect on the state of poverty throughout the United States, induced by the Wall Street crash. ...read more.

With the working title The Inside of His Head, Miller originally intended to make the setting itself a physics manifestation of Willy?s internal mental state, with the stage layout resembling the shape of a head. One could argue that Miller?s use of ?imaginary walls-lines? ? which characters walk through instead of the doors as to indicate a recollection of Willy?s past ? would show a comprised mental structure within Willy?s psyche. Although these externalities largely influence Willy?s behaviour, we must also consider him as symbolic, as he represents the struggling everyman whose belief in the flawed American dream is slowly killing him. Miller?s use of symbols within Death of a Salesman allows us to witness exactly how Willy, a tragic character bounded by ?his temper, massive dreams and little cruelties,? becomes progressively more influenced by both his thoughts and surrounding environment. By stimulating our senses and heightening dramatic tension, it is a quintessential device used to enhance the audience?s understanding and sense of sympathy toward this tragic character so mentally distorted by this ideal, without which there would be no tragedy to interpret. As a play famously described as ?a time bomb expertly placed under the edifice of Americanism,? Miller makes a great effort to illustrate his beliefs of the American Dream as a corrupt ethos by showing its tragic effect on the common American man. ...read more.