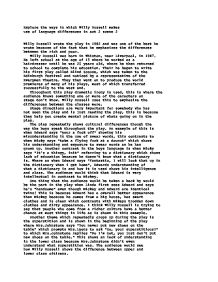 Explore the ways in which Willy Russell makes use of language differences in act 2 scene 2.

Explore the ways in which Willy Russell makes use of language differences in act 2 scene 2 Willy Russell wrote the play in 1982 and was one of the best he wrote because of the fact that he emphasizes the differences between the rich and poor. Willy Russell was born in Whiston, near Liverpool, in 1947. He left school at the age of 15 where he worked as a hairdresser until he was 20 years old, where he then returned to school to complete his education. Their he began to write his first play called Blind Scouse, which was taken to the Edinburgh festival and noticed by a representative of the Everyman Theatre. ...read more.

An example of this is when Edward says "your a fuck off" showing his misunderstanding in the use of swear words, this contrasts to when Micky says "take a flying fuck at a dounut" which shows his understanding and exposure to swear words as he has grown up. Another contrast in the boys language is when Micky says "It's a thingy, init" referring to a dictionary which shows lack of education because he doesn't know what a dictionary is. Where as when Edward says "Fantastic, I will look that up in the dictionary when i get home", Edwards understanding of what a dictionary is and how it is used shows his intelligence and class. ...read more.

Another theme which repeatedly crops up during the play is the superstition and is shown in the beginning of the play where Mrs.Johnstone says "You never put new shoes on the table" which prompts Mrs.Lyons to ask "So, your superstitious?" to which Mrs.Johnstone replies "No I'm not, you just don't put new shoes on the table." This shows an lack of understanding in the lower class because Mrs.Johnstone didn't even understand what superstition was. The audience would see how Willy Russell shows the difference between upper and lower class citizens. Adults are used thoughout the play to represent the boys, make the play more humorous and also because of the fact that some people might be offended if they see young boys swearing on stage. ...read more.