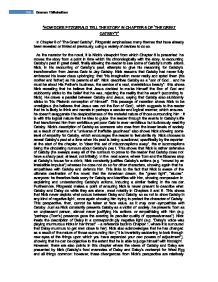 HOW DOES FITZGERALD TELL THE STORY IN CHAPTER 6 OF THE GREAT GATSBY?

"HOW DOES FITZGERALD TELL THE STORY IN CHAPTER 6 OF 'THE GREAT GATSBY'?" In Chapter 6 of 'The Great Gatsby", Fitzgerald emphasises many themes that have already been revealed or hinted at previously, using a variety of devices to do so. As the narrator for the novel, it is Nick's viewpoint from which Chapter 6 is presented: he moves the story from a point in time which fits chronologically with the story, to recounting Gatsby's past in great detail, finally allowing the reader to see some of Gatsby's motivations. Nick, in his recounting of Gatsby's past, attempts to give his reasoning for Gatsby's transformation from James Gatz to Jay Gatsby. Nick reasons that Gatsby had never fully embraced his lower class upbringing: that "his imagination never really accepted them (his mother and father) as his parents at all". Nick describes Gatsby as a "son of God... and he must be about His Father's business, the service of a vast, meretricious beauty": this shows Nick revealing that he believe that Jesus decided to make himself the Son of God and stubbornly sticks to the belief that he was, rejecting the reality that he wasn't (according to Nick). He draws a parallel between Gatsby and Jesus, saying that Gatsby also stubbornly sticks to "his Platonic conception of himself". This passage of narration shows Nick to be unreligious (he believes that Jesus was not the Son of God), which suggests to the reader that he is likely to think and narrate in perhaps a secular and logical manner, which ensures he doesn't exaggerate the despicableness of the material nature of those surrounding him: it is with this logical nature that he tries to guide the ...read more.

external characterisation of Gatsby through his past actions and internal characterisation of Gatsby through Nick's thoughts). An example of Nick thoughts on Gatsby's past is Nick assumption that "he (Gatsby) had had the (new) name ready for a long time", showing the level of discontent that he thought that Gatsby had previously, before his transformation .The reader learns that Gatsby came from a relatively impoverished background, having to pay his way through school with "janitor work" which he "despised". This shows the reader that Gatsby has transcended his roots to become as wealthy as he is, rather than inheriting his riches. This passage describing Gatsby's roots shows the reader that Gatsby (or Gatz, as he was) used to dream of being rich and powerful ("The most grotesque and fantastic conceits haunted him in his bed at night. A universe of ineffable gaudiness spun itself out in his brain..."). A picture of a poor James Gatz who dreams of re-inventing himself as the fabulously extravagant Jay Gatsby through any means necessary has now formed in the reader's mind. In addition to this, Gatsby's true reason for Chasing after Daisy is questioned: he apparently became "contemptuous" of women during this underprivileged period of his life. This may lead readers to believe that Gatsby merely desires Daisy to complete his great transformation from Gatz to Gatsby. This passage outlines Gatsby's first taste of higher class aboard Cody's boat. After Cody's death, "the vague contour of Jay Gatsby had filled out to the substantiality of a man" (i.e. the transformation had begun). This explanation of Gatsby's past tempers everything which occurs afterwards. ...read more.

the present) where, even though Gatsby has now attained the riches he desired after the death of Cody, the Sloanes and Tom still treat him with a high level of condescension. After the meeting of Tom and the Sloanes with Gatsby, time then jumps to Gatsby's party 'the following Saturday", where the party takes its course. After the party, Gatsby (clearly unhappy that Daisy did not enjoy herself) begins reminiscing, wishing that his relationship with Daisy could be as it was when he first met her. He is adamant that he can 'repeat the past', showing Gatsby's desire to relive the past and attempt to restructure it until perfection rather than accept what his past actually had been and for that matter accept his life as it was. This is yet another example of Gatsby attempting to re-engineer and re-invent his identity to an unrealistic level of flawlessness. After describing the "disorder" in his life in the five years since his relationship with Daisy, Fitzgerald then introduces another flashback, this time one of those happier times. This memory is most likely what Gatsby is thinking about in the aftermath of the party, and it is therefore indicative of his ironic yearning for one aspect of his past life: a relationship with Daisy with no complications (i.e. Tom). Fitzgerald's use of time in Chapter 6 allows the reader to access more of the background of the story, thereby allowing a higher level of understanding of the chronological story (mainly the motivations of Gatsby and his history). Fitzgerald uses a wide range of literary tools in the Chapter 6 to not only continue the story, but also emphasise many of its themes, as well the history of Gatsby, who had thus far been somewhat of a mystery. ?? ?? ?? ?? ...read more.