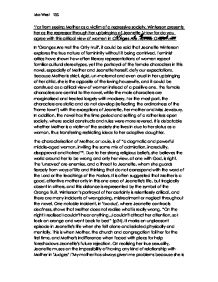 Far from seeing Mother as a victim of a repressive society, Winterson presents her as the repressor through her upbringing of Jeanette. How far do you agree with this critical view of women in Oranges Are Not the Only Fruit?

'Far from seeing Mother as a victim of a repressive society, Winterson presents her as the repressor through her upbringing of Jeanette.' How far do you agree with this critical view of women in Oranges Are Not the Only Fruit? In 'Oranges Are Not the Only Fruit', it could be said that Jeanette Winterson explores the true nature of femininity without it being contrived. Feminist critics have shown how often literary representations of women repeat familiar cultural stereotypes, yet the portrayal of the female characters in this novel, especially of Mother and Jeanette herself, defy our expectations. Because Mother is strict, rigid, un-maternal and even cruel in her upbringing of her child, she is the opposite of the loving housewife, and it could be construed as a critical view of women instead of a positive one. The female characters are central to the novel, while the male characters are marginalised and treated largely with mockery. For the most part, the characters are static and do not develop (reflecting the ordinariness of the 'home town') with the exceptions of Jeanette, her mother and Miss Jewsbury. In addition, the novel has the time period and setting of a rather less open society, where social constructs and rules were more revered. It is debatable whether Mother is a victim of the society she lives in due to her status as a woman, thus transferring restricting ideas to her adoptive daughter. ...read more.

Yet on reaching adolescence, she falls into more middle ground. Homosexuality falls outside of Mother's assumed heterosexual binary. Jeanette criticises her mother's perspective and suggests that the world does not exist only in such narrow margins. This is further described from a metaphorical slant when Jeanette struggles to remove the peel of the orange she has been given by Mother after her exorcism in Joshua, p113; "The skin hung stubborn, and soon I lay panting, angry and defeated. What about grapes or bananas?" With age, Jeanette has grown irritated with the dichotomy upon her life and seeks alternatives. Mother further enforces her views by saying in a sinister way, "...you've made your choice now, there's no going back." (p113). However, there is evidence in the novel that suggests more complicated feelings towards Mother, and that the relationship is/was not always a struggle. Winterson writes a comic send-up of Mother's aspirations "She had a way out now, for years and years to come". She seems to imply that her Mother was bored of the everyday life of the housewife and that adopting Jeanette gave her not a sense of purpose, but something to occupy her time with. Immediately after, a short passage creates a sense of suspended time: "We stood on a hill and my mother said 'This world is full of sin'. We stood on a hill...mother said 'You can change the world'" (p10). ...read more.

ended by saying that having taken on a man's role and world in other ways I had flouted God's law and tried to do it sexually" (Judges, p132). In having a feminist critical approach to this question, it could be read that 'Oranges...' is a lesbian Bildungsroman, and points to the social and political changes that have enabled a defiant lesbian heroine to emerge in literature. Typical of feminist readings is the focus on the Mother-Daughter relationship. Many feminist writers try to dispel the patronising saying "Like mother, like daughter", but on the other hand it is feminist to say that the history of women in society can be shown in the relationships between mothers and daughter - the next generations of women are affected by what their mothers were like as models and carers. Feminist psychoanalysts have argued that continued connection or a return to the mother is part of a woman's process of maturation, with the mother-daughter bond central to the development of female subjectivity. Ultimately, I feel that in Oranges Are Not the Only Fruit, Winterson presents a fairly critical view of women, but only in the context of Mother's environment. Mother has a strong will and imposes herself upon the narrative, which can only be seen as constructive to bringing the novel's vividness to the fore. Winterson manages to explore relationships between women that had not previously been dealt with in a way that is both comical and emotionally affecting. ...read more.