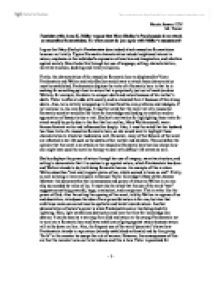 Feminist critic Anne K. Mellor argues that Mary Shelley's Frankenstein is an attack on masculine Romanticism. To what extent do you agree with Mellor's assessment?

Feminist critic Anne K. Mellor argues that Mary Shelley's Frankenstein is an attack on masculine Romanticism. To what extent do you agree with Mellor's assessment? I agree that Mary Shelley's Frankenstein does indeed attack masculine Romanticism however not totally. Typical Romantic characteristics include heightened interest in nature, emphasis on the individual's expression of emotion and imagination, and rebellion against society. She attacks this through her use of language, setting, characterization, narrative structure, doubling and literary allusions. Firstly, the characteristics of the masculine Romantic hero as displayed by Victor Frankenstein and Walton and why Shelley would want to attack these characteristics must be established. Frankenstein displays the traits of a Romantic hero in that he is seeking for something spiritual in nature that is perpetually just out of reach (as does Walton), for example, his desire to conquer death and nature because of his mother's death. Victor is often at odds with society, and is alienated from it because of this strong desire. Also, he is entirely wrapped up in himself and his own problems and indulges, if not wallows in, his own feelings. It must be noted that the main trait of a masculine Romantic scientist would be his thirst for knowledge and leading to ambition and an appreciation of beauty is also a trait. Shelley's motivation for highlighting these traits for attack would be partly due to the fact that her mother, Mary Wollstonecraft, was a famous feminist writer and influenced her deeply. ...read more.

However, the consequences of this are that the monster turns out to be hideous and this is how Victor is punished for attempting to pay god. Shelley further illustrates this by using the Gothic element of fear when Victor and human society rejects the monster because they fear him. Shelley's use of narrative structure, setting, literary allusions and symbolism is used here to attack the fact that masculine Romantic heroes go against nature and nature will make them pay. Romantic males usually tend to be very passionate about, and almost obsessed with their goals and with beauty and Shelley attacks this as being a detrimental characteristic. This is demonstrated by the repetition of the word "one" and use of words like "sole" frequently when Frankenstein tells his account of events. This shows that Frankenstein is passionate but more so obsessed with what he's doing even going as far as to isolate himself for the task. An example of how she attacks this is when she writes "surely nothing but the unbounded and unremitting and attentions of my friend could have restored me to life" The use of the word "restored" suggests that Frankenstein was already dead. This implies that human contact is life and human isolation is death and Henry represents the concept of human contact. Also, the fact that he implies that he is dead is evidence of doubling as he feels dead but is alive and the monster is made up of parts from the dead but is alive. ...read more.

To do this she uses language, setting, characterization, narrative structure, doubling and literary allusions. However, the strong biographical influences on the novel shows that she also may have used the novel as a way to deal with her intense and difficult feelings about issues in her life. Although it must be noted that Shelley lived in a time where Romantic poets of the age such as Keats, Percy Shelley and Byron practically invented and made popular the idea of Romanticism. Her time was highly influenced by the Industrial Revolution which enabled major technological achievements to be made as well as scientific ones. Hence the idea of creating a life using scientific means such as through the theory of galvanism wasn't so radical. However, since she's surrounded by masculine Romantics, attacking them would definitely be seen as radical and would be frowned upon. Nevertheless, I think that the attack is very much relevant in today's world as the current age is filled with aspiring young people who do not obey society's rules and regulations and are determined to make a place in the world, not only men. However, expression of emotion isn't as flared up as it was in Shelley's time so that aspect of the attack may be seen as overdramatic by today's readers. Mamta Jeswani 12N Mr. Turver - 1 - ...read more.