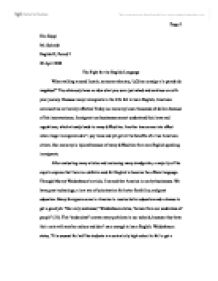 Fight for the English Language

Eric Zoppi Mr. Schmidt English II, Period 2 28 April 2008 The Fight for the English Language When walking around Loyola, someone asks you, "�C�mo consigo a la parada de megabus?" You obviously have no idea what you were just asked and continue on with your journey. Because many immigrants in the U.S. fail to learn English, American communities are harshly affected. Today our economy loses thousands of dollars because of this inconvenience. Immigrant-run businesses cannot understand their laws and regulations, which already leads to many difficulties. Another loss comes into effect when illegal immigrants don't pay taxes and yet get all the benefits of a true American citizen. Our economy is injured because of many difficulties from non-English speaking immigrants. After evaluating many articles and reviewing many standpoints, a majority of the experts express that there is a definite need for English to become the official language. Through Murray Weidenbaum's article, I learned that America is run by businesses. We have great technology, a low rate of unionization for better flexibility, and great education. Many foreigners come to America to receive better education and a chance to get a good job. "Our only weakness," Weidenbaum states, "comes from our underclass of people" (11). This "underclass" creates many problems in our schools, because they have their roots with another culture and don't care enough to learn English. ...read more.

But on matters of assimilation, they agree immigrants should be on the road to learning English" (Toonkel 8A). David Martin's article explores the reasons for learning English. He believes many countries speak English for economic advantages. English-speaking countries seem to be more closely bonded than other cultural countries. "...these various English-speaking countries share more with one another than any of them share with other cultural tradition..." (Martin 69) When English and Spanish cultures are compared he emphasizes the difference between them. The English economy is much more advanced than the Spanish economy due to the growing number of English-speaking countries. There is a lack of "economical expansion" in Spanish-speaking countries, such as Latin America, due to the bad conditions and America taking over the economy. "There is a world of difference between El Paso and Tijuana" (Martin 68). This creates the idea of: while Spanish countries suffer, English countries prosper. If Spanish countries want to exit this time of "depression", they should learn the English language. "What is crucial is adaptability and the capacity to devise what other people want" (Martin 68). Samuel Huntington thoroughly examines the aspects of immigration, providing unbiased facts and percents. There has been a massive influx of immigrants coming into the U.S. The problem that has been occurring more and more often, is that Mexicans and other Latinos have not been able to assimilate into America's culture. ...read more.

When we pay our tax dollars for doctors, dentists, and teachers, we do not think that someone can get all those benefits without paying a cent. Wrong! Illegal immigrants take free health care and dental care. It steals from the doctors and the dentists as well as us. My perspective on this subject is that making English the official language of the United States would benefit everyone, especially our economy. In a more personal approach, I see this as a great way to make communication easier and give everyone a better chance to get ahead or out of debt. If English doesn't become the official language of the U.S., we will lose our national identity, as well as the most advanced economy in the world. This issue should be of top importance because many Americans are affected by this problem every day. I believe that by 2020, English will be made the official language of the U.S. 27 states have already approved of this. These facts prove that English needs to become the official language of the United States. Our economy is losing much value and we are in turn being harshly affected by the outcomes of immigration. Just ask yourself: Am I going to change my country or are they going to change for my country? I am confident that your answer is the same as a majority of the U.S. citizens today. Not knowing English in America is like an elephant living in the ocean...it just doesn't work. ...read more.