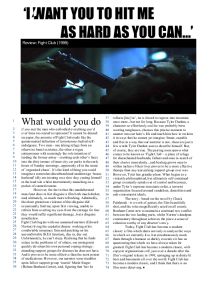 Film Review Commentary This is a film review intended for an educated adult audience with an interest in either the film Fight Club specifically, or cinematography in general. It is written primarily to inform, and secondarily to entertain the reader. The sophisticated vocabulary of the piece dictates its primary audience, as it includes abstract noun phrases such as 'supreme messianic order' which some younger audiences may have difficulty in understanding. Saying this, however, the piece does achieve a level of informality - despite the sophistication of its lexis - through use of non-standard verbs such as 'munching', contractions, and implementation of the second person pronoun 'you' (p1 l12) ...read more.

Similarly, anaphoric referencing is used to this same end: for instance (p3 l33) when 'it' is used to refer back to the aforementioned 'coping strategy'. Background information such as the film's basis on a novel and a semantic field of personal proper nouns like 'Norton' and 'Bonham Carter' is blended with personal interjection such as 'is a work of genius' and an elaborately descriptive lexical style to create a piece which appears both knowledgeable and subjective. Specifically in terms of descriptive lexis, I use lots of pre-modification of the noun such as 'ultimately self-contained group' and antithesis: 'working his comfortable job and perching on his uncomfortable IKEA furniture' to maintain the colourful and evocative nature of the piece typical of its genre. ...read more.

In order to produce accurate information such as quotes from the film and actors' names I used the internet as a research tool. I was able to protect myself against any subconscious plagiarism within this research by ensuring that I only read reviews of other films for guidance, and never those for Fight Club specifically. I received relatively positive feedback for my review and was able to make the suggested changes in expression made by my teacher to bring it up to a workable piece. I feel that through employing a combination of features suggesting familiarity and features suggesting a superior knowledge I was able to achieve the informal yet professional tone characteristic of film reviews. ...read more.