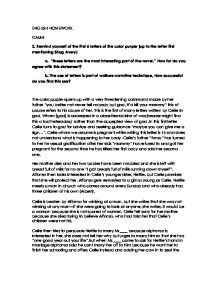 ENGLISH HOMEWORK OMAR 2. Remind yourself of the first 6 letters of the color purple [up to the letter first mentioning Shug Avery] a. "these letters are the most interesting part of the novel." How far do you agree with this statement? b. The use of letters is part of walkers narrative technique, How successful do you find this use? The color purple opens up with a very threatening command made by her father "you better not never tell nobody but god. It'd kill your mammy" this of course refers to his abuse of her. This is the first of many letters written by Celie to god. Whom (god) is addressed in a close-friends kind of way(reader might find this a tad heterodox) rather than the accepted view of god .In this first letter Celie turns to god for advice and seeking guidance "maybe you can give me a sign...". ...read more.

Celie felt sorry for her mother because she died trying to believe Alfonso, who had told her that Celie's children were not his. Celie then tries to persuade Nettie to marry Mr____ because alphonso is interested in her, she does not tell her why but urges to marry him so that she has "one good year out your life".But when Mr.____ came to ask for Nettie's hand in marriage alphonso said he cant marry her off to him because he want her to finish her schooling and offers Celie instead and adding her cow in to seal the bargain. Celie's step mom finds a picture of Shug Avery and Celie falls in love with her and makes her her idol. I don't believe these first 6 chapters of the novel are the most interesting ones, for they are merely an introduction to the abusive and voice-less life of Celie and none of the biggest ...read more.

Walker's use of Celie's own voice allow Walker to describe the life of black women in the south in a sympathetic and realistic way. Unlike how a historian might explain these living conditions which is in an overly antiseptic and overly -analytical way, Celie's letters offers a first-person view of these conditions of sexism, incest, and racism. Her words might seem a little senseless and stripped off excess emotion but still seem to reach the readers' hearts.we seem to believe that Celie has been numbed and cannot feel the pain the way it should be felt. "my mama dead. She die screaming and cussing. She scream at me she cuss at me" I think Walker was very successful at this since the reader is left with a multitude of emotions and feelings after reading every letter and being continuously true and corporeal from the beginning to the end. ...read more.