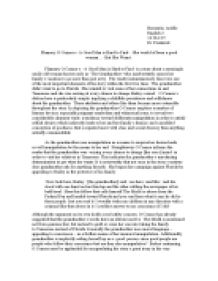 ﻿Bernstein, Arielle English 2 12:30-2:35 Dr. Frederick Flannery O?Connor?s ?A Good Man is Hard to Find?: ?She would of been a good woman?? But She Wasn?t. Flannery O?Connor?s ?A Good Man is Hard to Find? is a story about a seemingly senile old woman-known only as ?The Grandmother?-who inadvertently causes her family?s vacation to go more than just awry. The reader instantaneously discovers one of the most important elements of the story within the first two lines: ?The grandmother didn?t want to go to Florida. She wanted to visit some of her connections in east Tennessee and she was seizing at every chance to change Bailey?s mind?. O?Connor?s diction here is particularly simple, implying a childlike persistence and selfishness about the grandmother. These attributes and others like them become more ostensible throughout the story. In depicting the grandmother O?Connor employs a number of literary devices, especially poignant symbolism and whimsical irony, to reveal two considerable character traits: a tendency toward deliberate manipulation in order to satisfy selfish desires which indirectly leads to her and her family?s demise, and a muddied conception of goodness, that is equated more with class and social decency than anything actually commendable. As the grandmother uses manipulation as a means to acquire her desired ends, so will manipulation be the means to her end. Straightaway O?Connor informs the reader that the grandmother was ?seizing every chance to change [her son?s] mind? in order to visit her relatives in Tennessee. ...read more.

This kind of ?back in my day? type of decency is tied to being a ?gentleman? or a ?lady? but isn?t very decent at all. It is becoming more and more clear that grandmother has a skewed sense of morality more tired to class and societal decency than to deeply rooted mores. Her brief encounter with Red Sammy Butts enforces this perception to the reader: Two fellers come in here last week,? Red Sammy said, ?driving a Chrysler. It was a old beat-up car but it was a good one and these boys looked all right to me. Said they worked at the mill and you know I let them fellers charge the gas they bought? Now why did I do that?? ?Because you?re a good man!? the grandmother said at once. The grandmother, just meeting Red Sammy, cannot really know this to be true. She seems to be playing ?fast and loose? with the word ?good.? It is possible to see Red Sammy as ?good? because he was willing to help and trust seemingly decent people. No matter how this is interpreted the grandmother appears to use the word frivolously. Shortly after the family leaves Red Sam?s the grandmother recalls a nearby plantation she had visited in her youth: [The grandmother] knew that Bailey would not be willing to lose any time looking at an old house, but the more she talked about it, the more she wanted to see it??There was a secret panel in this house,? she ...read more.

However, it remains counterintuitive to forgive the host of manipulations, primarily because it is clear to the audience that grandmother didn?t have a solid sense of true goodness throughout the story. So it must be asked: why she would have this epiphany of goodness now? After shooting the grandmother The Misfit tells Bobby Lee: ?She would of been a good woman?if it had been somebody to shoot her every minute of her life.? This straightforwardly tells the reader that the grandmother was in fact not a good woman. And the only time she might have been confused with being good is if she had a moment like her last everyday, by having someone there to shoot her. Whether or not the grandmother was good in her very last moment has no bearing on the fact that because of her deceitful manipulation she and her young family are all dead. O?Connor made a point to carefully make known all grandmother?s character flaws though her exhaustive symbolism and her hysterical irony. The grandmother is held responsible, for death could have been delayed if only she had better judgment. Granny?s recipe for disaster in just three (again the archetype) selfish decisions: hide your cat from the family and bring kitty along against their wishes, manipulate the family in to seeing a plantation that isn?t even there, and lastly boast that you immediately recognize a sociopath to ensure he cannot let anyone escape. In the words of the notorious Misfit: ?She would of been a good woman?? but she wasn?t. ...read more.