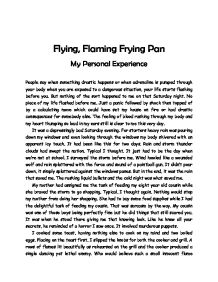 Flying, Flaming Frying Pan My Personal Experience People say when something drastic happens or when adrenaline is pumped through your body when you are exposed to a dangerous situation, your life starts flashing before you. But nothing of the sort happened to me on that Saturday night. No piece of my life flashed before me. Just a panic followed by shock then topped of by a calculating move which could have set my house on fire or had drastic consequences for somebody else. The feeling of blood rushing through my body and my heart thumping so loud in my ears still is clear to me this very day. It was a depressingly bad Saturday evening. For starters heavy rain was pouring down my windows and even looking through the windows my body shivered with an apparent icy touch. It had been like this for two days. Rain and storm thunder clouds had swept the nation. Typical I thought. It just had to be the day when we're not at school. I surveyed the storm before me. Wind howled like a wounded wolf and rain splattered with the force and sound of a paintball gun. ...read more.

Minutes past and the water surrounding the egg began to splutter like a heavy drinking sailor and rather I thought like a dormant volcano. I peered over the rim of the pan staring at the bubbling froth that surrounded the egg and the radiating waves of heat scoured my skin. Drawing back with the expression of mild contempt directed at the froth. The kitchen was of medium size giving a wooden oak effect. The table sat high fitted to the wall surrounded by wooden stools. Above the cooker was a steel fan extractor along with on each side were a silver microwave and kettle. The fridge was also silver and the wholeset along with the silver washing-machine went well with the wooden floor and cream wallpaper. It gave a warm welcoming appearance. The water boiling in the pan crackled and hissed like a snake showing its dislike at something, leaned over to the right hand corner of the cooker to open a drawer for salt. But something caught my hand. A very big something. There among where the salt should have been stood stood a bottle of a yellowish liquid. ...read more.

I rushed to the window like it was my last sanctuary. Life wasn't made easier as knob that would open the window was jammed. I pulled harder with all my weight on one side but to no avail. As I pulled the knob I was actually thinking of smashing the window with a stool when the knob turned one hundred and eighty degrees and opened with a wrench. Letting out a sigh of relief, I throw down a towel into the sink and ran water over it all the time aware that the heat was increasing but the size of the fire thankfully was not. I slipped the towel over the pan handle and threw the pan with all my might out of the window. It soared over the hedge right into the middle of the pavement. Which was coincidentally deserted. The fire flamed brightening the dark and rainy sky for a second before falling to its watery grave. It gave one last roar like a lion being thrown of a cliff would which was drowned by a loud but relieving hiss. I welcomed the sound and stared dreamingly at the rising mist. As footsteps entered kitchen I turned to see my cousin with his mouth open wide gaping at me and in his eyes was that knowing yet scary look. ?? ?? ?? ?? ~ 2 ~ ...read more.