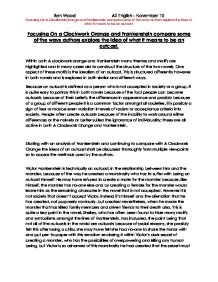 Focusing On a Clockwork Orange and Frankenstein compare some of the ways authors explore the idea of what it means to be an outcast.

Focusing On a Clockwork Orange and Frankenstein compare some of the ways authors explore the idea of what it means to be an outcast. Within both A clockwork orange and Frankenstein many themes and motifs are highlighted and in many cases aid to construct the structure of the two novels. One aspect of these motifs is the idealism of an outcast. This is structured differently however in both novels and is explored in both similar and different ways. Because an outcast is defined as a person who is not accepted in society or a group, It is quite easy to portray this in both novels because of the fact people can become outcasts because of their beliefs, the differences in appearance and possibly because of a group of different people it is a common factor amongst all societies, it is possibly a sign of fear or maybe even variation in levels of racism or acceptance criteria into society. People often create outcasts because of the inability to work around either differences or the naivety or better suited the ignorance of individuality; these are all active in both A Clockwork Orange and Frankenstein. Starting with an analysis of Frankenstein and continuing to compare with A Clockwork Orange the ideas of an outcast shall be discussed thoroughly from multiple viewpoints so to access the methods used by the authors. ...read more.

Alex being sent to prison was a way to improve the quickly decreasing safety and standards of life in the public sector, with his 'gang' being separated and later it is shown they are converted to help the government, a completely totalitarian state, and improve things in that society. This dramatically shows an idea of an outcast in Alex, who after being in charge of his 'droogs' at one time has been thrown violently from his perch of superiority and almost tyrannical charge and into a stat where he is being fully controlled beyond his free-will. Although the same doesn't quite appear in Frankenstein, the monster has to redevelop into his own segregated world to cope without coming into human contact, this being explained and shown in the setting of his speech with Victor, he has to escape to the tundra wilderness to be happy within himself, which coincidentally is where Victor has chosen to use as his peaceful place so he can contemplate his grave error without the distraction of society. The monster distinctively says, "I heard about the slothful Asiatics; of the stupendous genius and mental activity of the Grecians; of the wars and wonderful virtue of the early Romans-of their subsequent degenerating-of the decline of that mighty empire; of chivalry, Christianity, and kings." ...read more.

Now, this may have been the reason for William's death, but could the exclusion of society because of the Monster's appearance have contributed further to his angst, being misunderstood by society and shunned into hiding has seen thoughts of a possible good, loving nature turned into a murderous revenge - seeking train of thought. Obviously his outcast in this manner is down to Victor creating a single ugly being so automatically becoming an outcast because of the bespoke nature of the being but also due to the fear of a different being in society or possibly a level of racism where a being not wanted in society will be made to abandon society as a means of survival. In conclusion, the authors of both A Clockwork Orange - Anthony Burgess - and Frankenstein - Mary Shelley have don e well in concealing the ideas of an outcast in their novels, using the actions of the characters and knowledge of systematic psychological and sociological emotions the ideas of an outcast in the novels were unveiled. ?? ?? ?? ?? Ben Wood A2 English - November 10 Focusing On A Clockwork Orange and Frankenstein compare some of the ways authors explore the idea of what it means to be an outcast. ...read more.