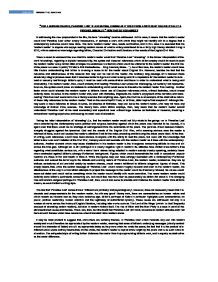 For a modern reader, Paradise Lost is alienating, coming as it does from a different era politically &amp; psychologically. how far do you agree?

"FOR A MODERN READER, PARADISE LOST IS ALIENATING, COMING AS IT DOES FROM A DIFFERENT ERA POLITICALLY & PSYCHOLOGICALLY." HOW FAR DO YOU AGREE? In addressing the view propounded in the title, the term "alienating" must be addressed. In this case, it means that the modern reader would find 'Paradise Lost' either simply inaccessible, or perhaps a work with which they might not identify with to a degree that a contemporary audience would have done. The term 'modern reader' also, needs clarification, and in this case it is assumed that the 'modern reader' is anyone who enjoys reading modern novels of what is widely considered to be a fairly high literary standard living in 2010, with no extensive knowledge regarding Milton, Classical Civilisation and Literature or the events of the English Civil War. There is much to commend the view that this modern reader would find 'Paradise Lost' "alienating". In the former interpretation of the word "alienating", regarding a stylistic inaccessibility, the syntax and classical references which Milton employ would do much to push the modern reader away. Milton often arranges his sentences in a fashion which would be unfamiliar to the modern reader: the first line of the poem is a case in point ("Of Man's first disobedience... ...read more.

Taking the latter interpretation of "alienating" (i.e. that the modern reader would not fully relate to the goings-on in 'Paradise Lost' when considering the contemporary socio-political and religious backdrop against which the poem was intended to be viewed), it is again clear that there would be no shortage of estrangement from the sentiments of the poem. The parallels drawn between Satan's almighty struggles against the tyrannical God and the events of the English Civil War, while seeming obvious once the reader is informed of them, could well escape the reader's attention if not for the notes preceding and following the actual poem itself. At the time of writing, such references would have been obvious to anyone with the ability to read the poem, but even with the knowledge that Milton's tale is an overt imitation of the Civil War, it simply would not resonate with the modern reader as it does with the contemporary audience. Another element which may cause disaffection in the modern reader is the divergence concerning attitude to vice and sin across the time gap. Although sin is still portrayed in a clearly negative light in modern life, attitudes have shifted since Milton's time regarding what constitutes ...read more.

These issues are addressed not only in a number of works across the history of English literature, including later works such as 'The Lord of the Rings' (which is itself frequently accused of alienating certain readers), but also in modern history itself. The rise of Hitler and the Nazi Party is a case in point of the aforementioned issues and themes. There can, then, be little doubt that 'Paradise Lost' still holds relevance to modern attitudes and that there are still themes which have resonance when translated into a modern arena. It may be most prudent to suggest that, while there are certainly themes in 'Paradise Lost' which translate very well into modern society and would therefore be appreciated by the modern reader, meaning that some of Milton's underlying messages (chiefly centred around the character of Satan) are still as appropriate today as they were when he wrote the poem, the fact that it is the product of a different social scene entirely means that, on the whole, the modern reader is kept at arm's length by the poem and is as such liable to alienation. The antiquated style of writing further distances the reader from truly appreciating Milton's work, and is equally as obstructive as the social difference. ?? ?? ?? ?? ...read more.