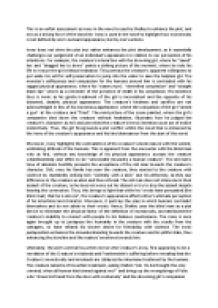 Transfer-Encoding: chunked ﻿This is an unfair assessment as irony in the novel is used by Shelley to enhance the plot, and not as a driving force of the storyline. Irony is used in the novel to highlight how monstrosity is not defined by one?s outward appearance, but by one?s actions. Irony does not drive the plot but rather enhances the plot development, as it essentially challenges our judgement of an individual?s appearance in relation to our perception of his intentions. For example, the creature?s interaction with the drowning girl, where he ?saved? her and ?dragged her to shore? paints a striking picture of the moment, where he risks his life to rescue the girl without hesitation. This portrays the creature?s apparent willingness to put aside his will for self-preservation to jump into the water to save the helpless girl. The monster?s selflessness and compassion for the humans around him is contrasted with his ragged physical appearance, where his ?watery eyes?, ?shrivelled complexion? and ?straight black lips? serves as a reminder of the presence of death in his complexion. ...read more.

The old man?s tone of absolute hostility presents the acceptance of the old man towards the creature?s character. Still, once his family has seen the creature, they reacted to the creature with violence by repeatedly striking him ?violently with a stick? due his deformity, as they saw difference in the creature as alien and thus a threat. The old man does not intervene in their assault of the creature, as he does not voice out his dissent or try to stop the assault despite hearing the commotion. Thus, this brings to light that while his ?words have persuaded [the blind man] that he is sincere?, the creature?s appearance affects other?s ultimate perception of his intentions and character. Moreover, it portrays the ease in which humans contradict themselves and do not abide to their words. Hence, Shelley uses the blind man as a plot device to eliminate the physical factor of the definition of monstrosity, and attributed the creature?s inability to connect with people to his hideous countenance. ...read more.

and how this form of mistreatment applies only to the creature as people who committed similar crimes did not receive the same consequences. It also addresses the irony that revolves around the whole novel, where the monstrous acts by the humans are not taken into judgement, but the crimes of the creature is critically judged by humanity thus deeming him a monster. The hypocrisy of humanity labelling the creature of being a monster when the humans themselves possess monstrous doings enhances the revelation of the storyline through an impactful conclusion made by the ?monster? himself. As such, the creature who ?murdered the lovely and the helpless?, ?strangled the innocent as they slept? and ?grasped to death his throat who never injured [him] or any other living thing? did so as a reflection of humanity?s actions, where time and time again the creature was met only with violence. Therefore, the creature reverting to violence as a means to obtain what he seeks is only a mirror of humanity?s inhumane treatment to the creature. ...read more.