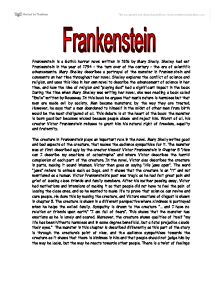 Frankenstein. The creature in Frankenstein plays an important role in the novel. Mary Shelly writes good and bad aspects of the creature, that makes the audience sympathise for it

Frankenstein is a Gothic horror novel written in 1816 by Mary Shelly. Shelley had set Frankenstein in the year of 1794 - the turn over of the century - the era of scientific advancements. Mary Shelley describes a portrayal of the monster in Frankenstein and comments on her time throughout her novel. Shelley explores the conflict of science and religion, and uses this idea in her own novel to describe the advancement of science in her time, and how the idea of religion and "playing God" had a significant impact in the book. During the time when Mary Shelley was writing her novel, she was reading a book called "Emile" written by Rousseau. In this book he argues that man's nature is harmless but that men are made evil by society. Men become monsters; by the way they are treated. However, he says that a man abandoned to himself in the midst of other men from birth would be the most disfigured of all. ...read more.

After his mother passing away, Victor had motivations and intensions of making it so that people did not have to feel the pain of loosing the close ones, and so he wanted to make life to prove that science can revive and cure people. He done this by making the creature, and Victors emotions of disgust is shown in chapter 5. The creature is shown in a different perspective where kindness is portrayed when he helps the exiled family. Sympathy is drawn to the creature "... and I have no relation or friends upon earth" "I am full of fears". This shows that the monster has emotions as he is lonely and scared. Moreover, the creature shows qualities of itself "my life has been hitherto harmless and in some degree beneficial, but a fatal prejudice clouds their eyes." The monster in this chapter is described differently as this part of the story is through the creature's point of view, and the audience sympathises towards the creature as it shows that there is kindness ...read more.

The early 19th century saw an increasing conflict with religious beliefs and how science and using scientific methods to revive and cure people was "playing God". The clash between science and religion was mainly introduced at this point of time. The idea of the novel "Frankenstein" shows this conflict and it relates to how the knowledge of science and using it in the wrong way had an impact on the society of the early 19th century. It reveals that Victor Frankenstein created a creature to prove to everyone that science can create, revive and cure lives; however the advancement of science introduced fear to the general religious public as they could not accept the fact that this was "playing God". Science and its advancement was introduced early in time, which created a mixture of feeling of fear, dread and wonder to the religious public that created a clash between Science and religion. The time and era reflects on the science advancement. Science advancement and technologies such as vaccination to prevent illnesses were introduced early in time, creating clashes with science and religion. ...read more.