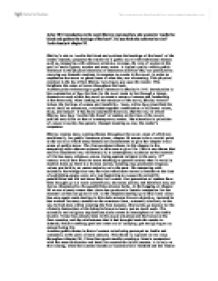 Frankenstien;In her 1831 introduction to the novel Shelley explained how she wanted to 'curdle the blood and quicken the beatings of the heart'. Do you think she achieves her aim? Look closely at chapter 20.

In her 1831 introduction to the novel Shelley explained how she wanted to 'curdle the blood and quicken the beatings of the heart'. Do you think she achieves her aim? Look closely at chapter 20. Shelley's aim to 'curdle the blood and quicken the beatings of the heart' of the reader instantly prepares the reader for a gothic novel with traditional themes such as, tampering with unknown sciences, revenge, the role of women at the peril of male figures, murder and many more. A typical quality within gothic literature is the physical reactions of characters and how they are portrayed as carrying out dramatic motions in response to events in the novel, in order to emphasise the terror or ghastliness of what they are witnessing. This physical reaction is the key effect Shelley is trying to put upon the reader. This heightens the sense of terror throughout the book. Another point referencing to gothic literature in Shelley's 1931 introduction is her explanation of how the idea for the novel came to her through a dream, dreams are used within the novel to create a sense of unease and foreboding. It has been said, when looking at the structure of the novel, Shelley tries to induce the feelings of unease and instability, 'many critics have described the novel itself as monstrous, a stitched-together combination of different voices, texts, and tenses'. ...read more.

Women are traditionally seen as weak helpless beings in gothic novels, and although Shelley has contradicted this through the action of some female characters in various stages of the novel, it is generally portrayed as the woman being a helpless victim or in need of a dominating man to save her. Duality is another technique used in gothic literature. By setting up opposites running parallel it emphasises the extremes in their contrasting factors. Shelley has set up many dualities throughout the novel and the conflict between good and evil is obviously apparent in chapter 20. This is especially shown at the beginning of the chapter when the reader gains perspective of Victor's toil and torment when thinking of the creation of the female companion. After hearing the monsters narrative the reader does sympathise with his wanting for a companion. On the other hand however the reader sympathises with the reasons victors has against the creation. Victor knows the monster will never be accepted into society as everyone is "prejudiced in so deadly a manner" and that the companion may just inherit the resentment toward the human race and pose a threat. This conflict between two opposing elements is a very gothic devise, Shelley uses it throughout chapter 20 through; the creation of life and death through the companion's destruction; and the distinction between duty and responsibility, victor had a duty to the monster but a responsibility to mankind. ...read more.

Again making the characters actions harder to predict, which builds up a sense of tension and heightens fear of his actions. Shelley uses classic gothic themes throughout the novel to heighten tension and create a sense of terror. She uses a mixture of gothic themes throughout the novel and techniques in specific chapters to create tension and terror. Whether she has achieved her aim however depends greatly on the individual. Many aspects of society condition their inhabitants into holding different beliefs and values. One of the main ways Shelley creates horror is through a sense of shocking the reader by controversial events. For example the way Shelley usurps the role of god could potentially shock people with strong religious beliefs and the act of someone going so against god could create a feeling of terror. Others may be affected by the gothic techniques for example pathetic fallacy. The way in which this is used throughout the novel heightens the reader's awareness of upcoming events. The suspense of the readers wait for the unknown again induces terror and emphases the climatic events. Chapter 20 is one of the most successful chapters in not only creating a sense of terror through Shelley's techniques but by further shocking the reader by the dramatic climax of the events Shelley has built up to. Shelley has definitely succeeded in producing a gothic piece of writing that effects the reader's emotions, her aim however to have such an impact of terror on the reader is dependent on the individual. ...read more.